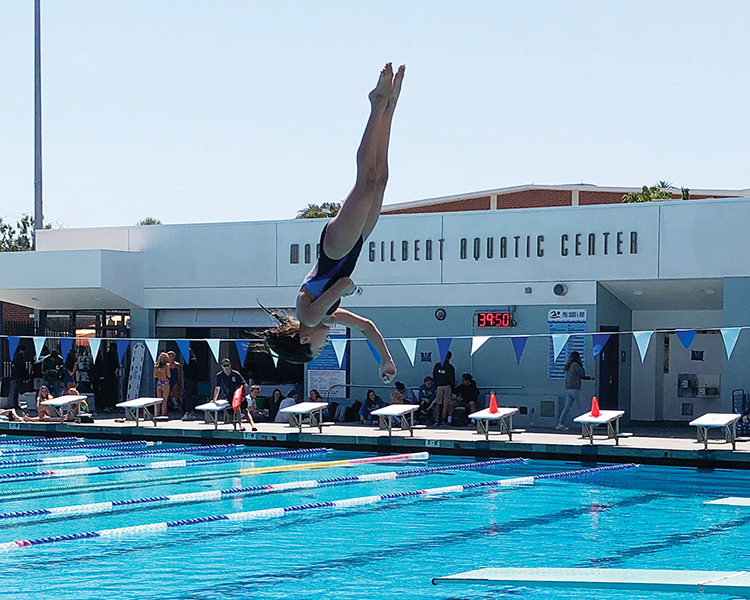 Palisades High School divers Alexis Kleshik and Maya Salvitti took first and second, respectively in the girls one-meter diving on May 7, while teammate Andrei Kozeluh took third in the boy’s event. All qualified for the state meet at Clovis this past weekend.

A diver must complete 11 dives, and judges give points on each dive, with 10 being the highest. The divers are rated on the execution and the difficulty of the dive.

For example, those done in the pike position are deemed more difficult than those in the tuck position. Divers are judged on approach, takeoff (is the diver’s body balanced?), flight (height, rotation of twists and somersaults) and entry (the less splash going into the water on the completion of the dive—a rip entry, rates a higher score).

This is Kleshik’s second straight city championship, with a score of 519.80 after 11 dives. The junior started diving when she was about 10 years old when she lived in Texas. “I was swimming, but diving just looked more interesting,” she said, noting that her favorite dive is a back one-and-half in a pike position.

Her family moved to California four years ago, and PaliHi is her third high school.

In addition to training at the Maggie Gilbert Aquatics Center, she also trains at UCLA, where she dives off the three-meter board and the tower.

“In a club competition, I scraped my hand on a board,” she said, showing the News the almost-healed scabs on her hands. “I changed my gainer one-and-half pike to the tuck position for this meet.”

She wasn’t happy with her performance at the state meet last year, but she attributed a lot of it to nerves. This year she will face 27 other divers and with her city diving score, she goes in ranked sixth. Rami Edvalson, a freshman from Archbishop Mitty is ranked first with 557.15.

Ranked eighth in state, freshman teammate Maya Salvitti, will participate in her first state meet, by virtue of taking second in the City Finals.

“I used to do gymnastics,” said Salvitti, who attended Revere Middle School. Her favorite event was bars. “The twisting I did there has really helped me with diving.”

She said she heard about diving from a friend and decided to give it a try. Salvitti was asked about the hardest transition for a gymnast switching to diving.

“Definitely going in head first is strange for a gymnast,” she said.

The first time Salvitti dove from the tower she said “It was pretty scary, but kind of exciting.

“The tower is fun, because I don’t have to worry about the timing on the board,” Salvitti said.

Taking third at City Finals was PaliHi sophomore Andrei Kozeluh, with 426 points, which was high enough to set a new PaliHi record.