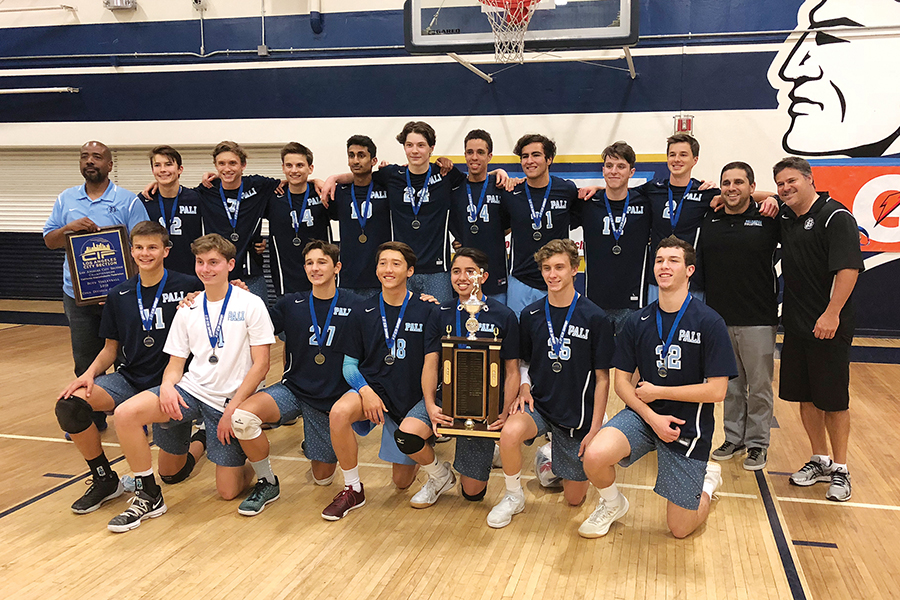 It only took three sets for the Palisades High School boys volleyball team to repeat as CIF Los Angeles City Section Champions by defeating Chatsworth at Birmingham High School on May 19.

Watching the athleticism of the PaliHi players, the easy flow between teammates with unspoken communication about where they needed to be to play most effectively, the hard slams and gentle taps of the ball that set their opponents flying to areas of the court only to be fooled when the ball went a different direction; the digs, the jousts; . . . It was fun watching a good team play, and an overall victory for the Dolphins was never in doubt.

“I knew that they [Chatsworth] had an extremely talented team,” Coach Carlos Gray said after the game. “I knew we would have our hands full.” PaliHi had faced the Chancellors in the quarter finals of the Dos Pueblos Invitational Tournament in March, beating them 1-0.

“We made some adjustments with our blocking, and what hitters were going where,” Gray said.

“We trusted ourselves and played our game today,” Jeff said.

“We definitely prepared for this game,” said twin brother Scott Stuart, 6’0” an outside hitter. “It’s an amazing program, and I’m glad I got to play for my school.”

“This is one of the smartest teams I’ve ever played with,” Jeff said. “The volleyball IQ for the game is high.”

According to MaxPreps, the Dolphins are ranked 11th in California and 15th nationally. Overall this season they were 33-2 and 12-0 in league.

One of the Dolphin’s losses this season was in the championship finals in the Dos Pueblos tournament in March against Alemany. PaliHi’s Akhil Tangutur, a 6’3” junior outside hitter, and Miles Partain, 6’2” junior setter/opposite hitter, were among the eight players named to the all-tournament team. The team’s other loss was in the semifinal of the Karch Kiraly Tournament of Champions against the top-seeded Corona Del Mar in April, where Pali took third. Partain and Tangutur were once again selected to the all-tournament team.

PaliHi defeated La Costa Canyon 25-21, 25-17 to win the Redondo Varsity Classic in late April. Tangutur was selected as the tournament’s most valuable player, and Partain and Justin Howard, a 6’6” junior middle blocker, made the all-tournament team.

With this championship win, the Dolphins won a spot in the regional tournament, which started May 22.

“We won the Redondo tournament, which may give us enough push to get a middle ranking and a home game,” Gray said. (Rankings were not released before press time.)

Last year the boys were seeded 8th and lost to the top-ranked Corona del Mar in the first round. Loyola won the SoCal Division 1 championship in 2017 by beating Corona del Mar.