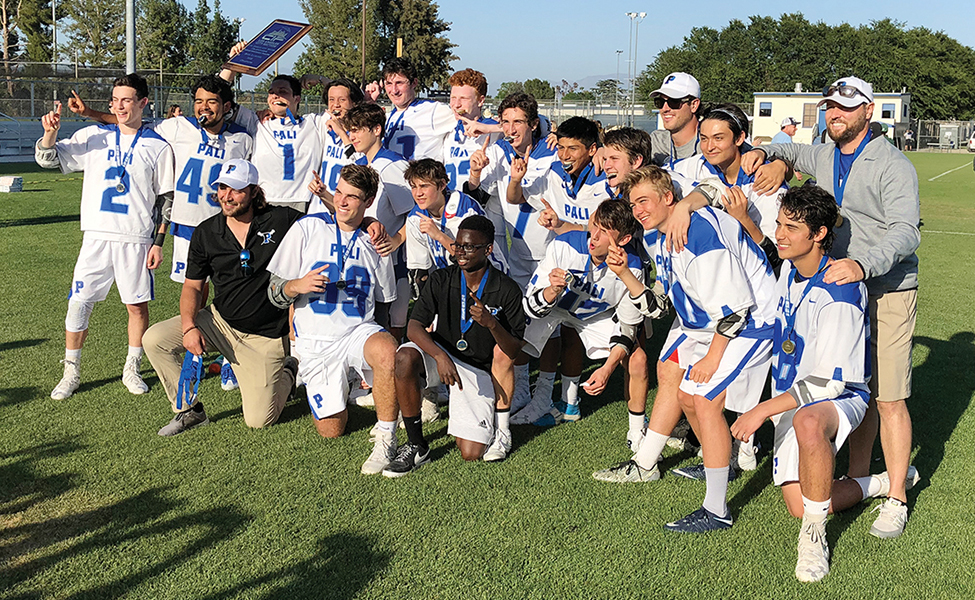 By the end of the second quarter in the City Section championship game on April 28, the Palisades High School boys lacrosse team led Hamilton, 14-3, and never looked back.

The final score was 21-3 at Birmingham High as the Dolphins captured their third straight city title.

“We started a little slow,” said Pali head coach Kevin Donovan. “Before the game I said, ‘share the ball.’ I’m proud of the guys, they didn’t relax, and they could have.”

“It feels fantastic,” said senior co-captain Martin Avila. “Winning a championship is always great to get under your belt. Now we move on” [to the regional playoffs.]

Another senior co-captain, Macchio Rissone, who has been one of Pali’s top scorers since he made the varsity team as a freshman, said, “This is one of the most emotional championships.”

The Dolphins are a young team and Rissone felt that “I wanted to help develop the freshmen—give them a role model.

“I felt like I had to make the people around me better,” he said. “It’s a team sport.” And by developing other players to score, Rissone wasn’t constantly double teamed.

“We have a pretty good team this year,” Donovan said. “Of the three teams I’ve taken to the city championships, this is the strongest.”

Even though he had a lot of young play- ers, he had his team play a tough schedule from the beginning. “We could go 16-3 and win city,” he said, “but I’d rather go 9-9 and get the team prepared for the regionals.”

Indeed, the Dolphins finished 10-8 overall and 5-1 in league. At the start of the season, they were ranked 14th in Southern California (Loyola was ranked No. 1). One of Donovan’s goals was to have a top-10 ranking, which he achieved last week with Palisades coming in at No. 10. Loyola was No. 1 and Palos Verdes No. 2.

Donovan and his assistant coaches, Will Manning and Mike Kutzer, all played Division I lacrosse in college and Donovan admits, “My playbook is a little more sophisticated.”

One of his challenges this year has been injuries. “We haven’t had a full team healthy, or at a game,” the coach said. “We’ve had three or four starters out.”

Donovan gave a shout out to his goalie, senior Abner Santiago, for his numerous saves all season.

On Sunday, coaches held a seeding meeting to determine the top 16 teams that will enter the Southern California invitational tournament. Eight lower ranked teams will have their own bracket.

Donovan expected Pali to be ranked around 12. “Our goal is to get past the first round,” he said. “Each year we’ve had a better ranking than the year before.”

Whoever is ranked 15 or 16 will face Loy- ola or Palos Verdes, and “you don’t want to be that team,” Donovan said, smiling.

He expects that the Dolphins will play Westlake (ranked 6) or Agoura (ranked 7), but whoever they face, “This team still has something to prove,” he said.

By May 5, 2018
in Uncategorized
Related Posts
Comments
Leave a ReplyCancel reply