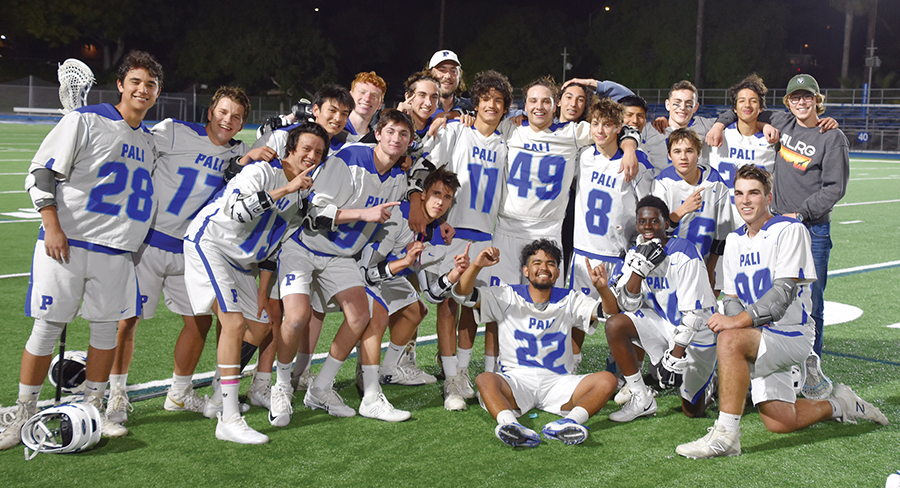 By defeating Mira Costa 15-13 on April 12, the Palisades High School boys lacrosse team will move up in rankings.“ We probably will be ranked ninth or tenth,” head coach Kevin Donovan said.“We haven’t been ranked in the top 10 since 2012.”

When Donovan and defense coach Will Manning inherited the team three days before the season started in 2016, the once-successful program was in disarray. The talent was there, but coaching leadership was needed.

Donovan and Manning, who both played Division 1 lacrosse in the Patriot League back east, went to work and the Dolphins won the City Section championship in 2016, and again in 2017.

This year, Palisades has added a third coach, Mike Kutzer, who also played lacrosse in the Patriot League.

Overall, Donovan is pleased about the program’s progress. “It feels good, we’re a lot more organized and we’re getting a lot of support from the parent lacrosse board,” he said. “We’re making the program more efficient.”

He also noted, “We have a better team this year. The game is still growing out here, and there are still headaches and obstacles to overcome.”

At the start of the season, the Dolphins were ranked 14th in Southern California, with Loyola ranked No. 1. But as in prior years, Donovan challenged his team early with three tough opponents, and they lost to 4th-ranked Chaminade (15-7), 3rd-ranked Harvard-Westlake (15-2) and 7th-ranked Agoura (16-8).

Playing tougher teams is part of Donovan’s philosophy. “We could go 16-3 [in the City] and win everything, but I’d rather go 7-7 and get the team prepared for the regional playoffs.”

He continued, “We’ve won the games we were supposed to this year. Our goal is to be ranked in the top 10.”

A 24-12 loss to 5th-ranked Westlake on April 6 hurt Pali’s ranking, but the win against Mira Costa moved them up. If the Dolphins beat Newbury Park on April 17, it could move them higher.

One of Donovan’s challenges this year has been injuries. “We haven’t had a full team healthy, or at a game,” the coach said. “We’ve had three or four starters out.”

The team has five seniors: Macchio Rissone, who has been a leading scorer since he stepped on the field as a freshman and is a captain; Aidan Caso, who plays attack; Liam Mathers, a defender and captain; Martin Avila, a long-stick defender and a captain; and goalie Abner Santiago.

“Abner, Martin and Liam have been the backbone of our defense,” Donovan said. “Abner’s brother, Alessandro, is a sopho- more and he’s on attack.”

The midfielders—Jack O’Rourke (also a captain) and James Burks—are both juniors, which bodes well for next year’s program.

The Dolphins are looking forward to playing 6th-ranked Oak Park at home on April 21 at 11 a.m. The city championship game is April 28, and the regional playoffs start the first week in May. Only the top 12 teams will qualify—and it should include the Dolphins.