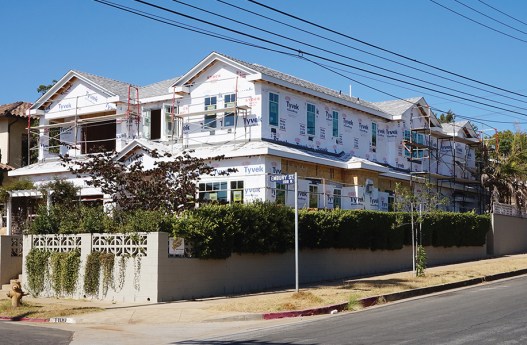 On Christmas Eve, in the late afternoon, I was making my third trip to Gelson’s. The first two trips, every cash register was open and there were lines of people. But this time, a man pushing a shopping cart filled with small bouquets stopped at each register and gave the worker a small bouquet of flowers. It was such a nice thing to do and the workers all smiled and seemed pleased. I asked the clerk and she said the man was a regular shopper.

After hearing that the homeless were responsible for starting the Skirball fire that destroyed homes in Bel-Air, I am particularly thankful that Bruce Schwartz, a member of the Pacific Palisades Task Force on Homelessness who persisted in getting the “no camping, high fire severity zone” signs posted. I’m also thankful for Rusty’s [LAPD Officer John Redican] enforcement efforts.

I love that the Village Green committee puts up lights in that tall, tall tree every Christmas. I was told that Fire Station 69 helps hang the lights. Thank you guys, you’re just the best!

Can anyone explain why two, three or four people need such huge houses in places like Pacific Palisades? If we truly wanted to help save the planet, we wouldn’t use so many resources to build giant structures that are mostly not used. It seems they are just for show. Even if these houses are energy efficient, they still use considerable electricity, and building them means trees are chopped down and plants eliminated— the very things that help cool the planet.

My resolution this year is to spend less time on Nextdoor Palisades and looking at my Facebook page, and instead try to interact with real people.