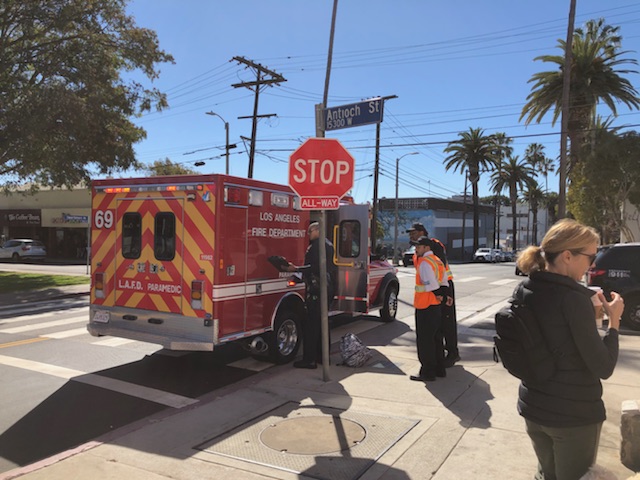 If you walk along Sunset Boulevard above the Palisades High School baseball field, you can see how the dirt has eroded from under the sidewalk, causing it to drop. If the City doesn’t take care of this problem, the ersion could also cause Sunset to drop.

I just cringe every time someone says we should be thankful that we have Caruso doing his Palisades Village project because it could be a Chinese developer. How discriminatory is that? There are good and bad developers of every race and nationality, and shame on anyone who singles out one nationality as bad without actually specifying a person and his/her prior actions. Doesn’t anyone remember the shameful Japanese internment camps during World War II?

A car, driven by a reasonable-looking man, blew through the intersection at Via and Antioch right in front in front of me, not even pausing at the sign. Minutes later, a large SUV turned right at another intersection, blocks away on Sunset, as a couple with a stroller “legitimately” stepped off the curb. I am incensed by this behavior. These were careless actions, performed by otherwise reasonable-appearing drivers. Not just a matter of someone possibly running late, just someone running stupid.

Collections Antiques and Accessories on Antioch has started carrying a few out-of-print and collectable books. After Phillip Roth’s death was there was a mini “shrine” in the window. It’s refreshing to see books in a store window.

(Editor’s note: Jeff Ridgway, who worked at Crown bookstore and later Village Books, has assembled some of those hard-to-find books. Owner Martha Strang invites you to stop by.)

I just got the best news that K Bakery, which has great baked goods, sandwiches and salads, will be opening in the old Roast spot in the Highlands Village. I liked to visit her place on Sunset, near the old Jack in the Box, but parking there was always impossible and there wasn’t really room to sit down.

(Editor’s note: We were told that the sandwich shop and bakery would be opening after Labor Day. Owner Kim Kedeshian, who received the Bob Sage Business Person of the Year Award from the Palisades Rotary Club, will also open Mediterranean-themed restaurant Armav in the 970 Monument building in October.)