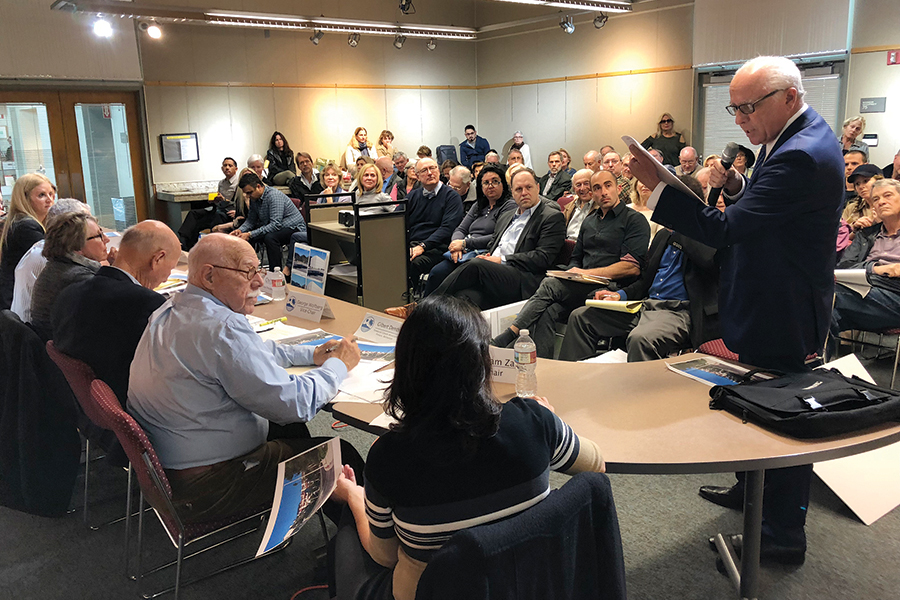 The proposal to build an 82-unit eldercare facility in the Palisades Highlands has become a complicated, unresolved nightmare for both sides.

After the Los Angeles City Planning Department approved the project on January 26, residents Robert Flick and Jonathan Klar filed an appeal on behalf of the opposition group, Highlanders United for Good (HUG).

This appeal will now go before the West L.A. Area Planning Commission on April 18, but without the explicit support of the Pacific Palisades Community Council (PPCC).

The contentious process began as soon as Brentwood developer Rony Shram unveiled his plans last June for a four-floor facility on a long-vacant lot at the corner of Palisades Drive and Vereda de la Montura, located between a small business complex to the south, condominiums to the east and north and parkland to the west.

The Community Council’s Land Use Committee (LUC) was tasked with reviewing the proposed project at a public meeting on October 26 and then make recommendations to the council.

The PPCC is an all-volunteer organization that does not have the legal right to make or pass laws, but it can recommend to L.A. city officials on issues for “where there is broad community agreement.”

“LUC voted to recommend that the PPCC board find that the use is appropriate, but that a number of concerns were raised on which the LUC could not reach consensus.”

Subsequently, the Community Council passed the following motion on October 26: “PPCC finds that the proposed eldercare facility is an appropriate use. We note community concerns about height, safety, access, noise, disruption and proximity to zoned open space. The developer assures us that the Palisades Drive driveway will be modified to exit only. Further, the developer assures us that he will be responsive to complaints about outdoor light.”

City Planner Henry Chu, the associate zoning administrator who heard the case and wrote the 32-page Letter of Determination on January 26, said the project was within the city zoning requirements. In that determination, the project received zoning approval, a Coastal Development permit and a categorial exemption under CEQA.

Project opponents went to the Land Use Committee meeting on February 23 and argued that the committee had not included Coastal Development issues before making a decision. When the vote ended in a tie about whether the LUC should consider the Coastal Act, PPCC President Maryam Zar broke the tie in favor of the LUC rehearing the project through a coastal act lens.

On March 13, the LUC held a second hearing and again heard from developer Shram and his opponents.

During the rebuttal, Jonathan Klar argued that the city had no right to issue a Coastal permit and that state parkland is entitled to special protection (the project abuts Topanga State Park).

One audience member opposed to the project added, “It is not an issue of visual compatibility, this is an issue of safety of all residents, because there is only one road in or out [of the Highlands].”

Rick Lemmo, an executive with Caruso who holds the Pacific Palisades Chamber of Commerce seat on the Community Council, argued differently.

“The issues have been decided before. This is less about information and more about process. It is wrong on the process to go back; it trips up a person’s right to do business.”

LUC member Sarah Conner (president of the Pacific Palisades Residents Association) said, “We are not a committee of
opinions. This project violates laws.”

Once again, the Land Use Committee could not muster enough votes to change its initial recommendation to PPCC.

A day after the meeting, the News met with Conner and resident Joe Halper, who has left the West L.A. Area Planning Commission to serve on the Recreation and Parks Commission, to learn what laws were being violated by the city’s action.

The Highlands, although three miles from the ocean, is in the coastal zone, and the California Coastal Act of 1976 has precedence over city law. Conner and Halper said that requirements under coastal law had not been met by the proposed Highlands project.

Halper felt that the city planner had not exercised proper due diligence regarding the Coastal Act when he made his determination, and this will be addressed by the Planning Commission. The board has only four members pending the appointment of Halper’s successor by Mayor Eric Garcetti.

If there’s a 2-2 vote on the appeal, Halper said, the project will move forward, but an appeal can be made to the Coastal Commission.