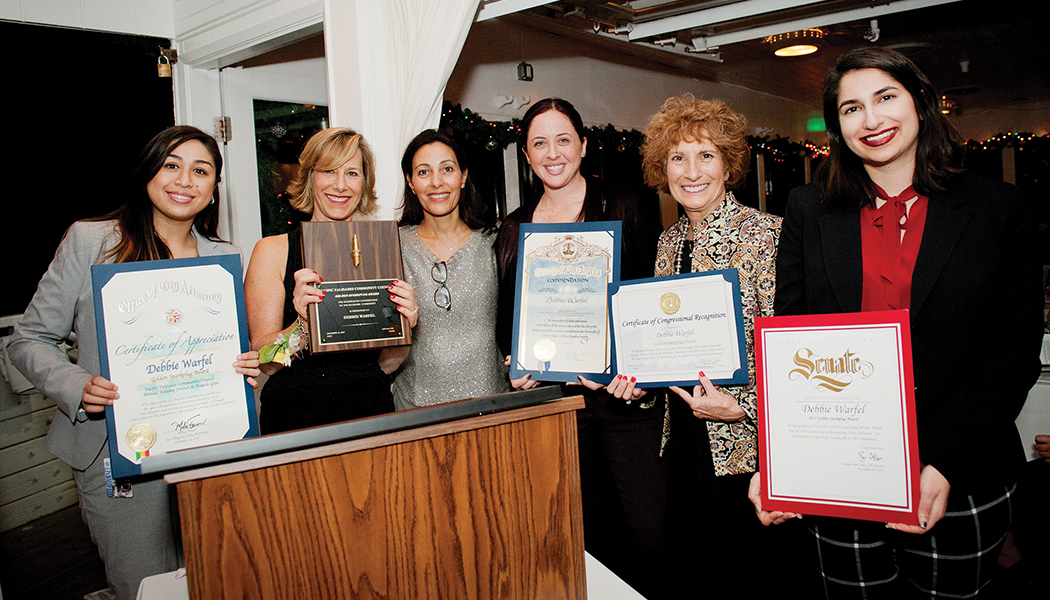 The Pacific Palisades Community Council hosted the event, marking the 70th anniversary of the Citizen of the Year award, presented this year to Bruce Schwartz. (The list of past Citizens can be viewed at pacpalicc.org.)

Residents Howard Robinson and Peter Culhane spoke about Schwartz’s accomplishments and noted that he was a 2012 Golden Sparkplug recipient for his “Safety on Sunset” program, and last year was responsible for securing the signs that prohibit camping in high-fire-severity zones in the Palisades.

As a member of PRIDE, Schwartz also planted flowers (and flags) and cleared street medians on Sunset in an effort to beautify the community. In addition, he was on the committee that pushed the City to clear standing water along Palisades Drive.

When he received his award, the usually talkative Schwartz seemed overcome with emotion and simply said, “Thank you.” The four Golden Sparkplugs—Warfel, Creed, Rodman and Steckmest—were honored next. This award recognizes citizens who ignite original ideas and projects into action that benefits the community. When Debbie Warfel noticed an increase in airplane noise over Santa Monica Canyon, she contacted the FAA, LAX Noise Roundtable and elected officials. She was able to raise money to hire a lawyer to advocate for residents.

“I’m honored to have this award,” Warfel said. “It’s a long battle and we’re still in it. “I share this award with Wes Hough and John [her husband], and with my mother (Charlene Hartman), who taught me and my brothers that if something bothers you, take action.”

Introducing Creed, Council Representative Lou Kamer said, “About eight months ago, he wanted to find a way to clean up the abandoned homeless encampments, so he mapped them out—and then he had a few of us pulling trash out of the bluffs.

“He has organized more and more clean-ups,” said Kamer, who credited Creed with helping to restore the land to its native state.

“A sparkplug on its own is useless,” said Creed, noting that 50 local campsites have been cleaned (filling 19 dump trucks with debris) and about 20 sites remain. “I couldn’t have done it without the support of the people here tonight.

“If someone asks,‘What can I do to help?’” Creed said, “Give them something to do and that’s how we can all make a difference.”

“We asked LAUSD for more buses to alleviate traffic problems at Revere,” Wolfberg said. “Instead, they took them away.”

But once Rodman joined the Revere traffic committee, parents took action and eventually added seven buses, taking 300 vehicles off the road daily. “Many people think Matt is the principal because he shows up at 7 a.m. and directs traffic around Revere,” Wolfberg said. “If I didn’t like Matt so much, I’d beg Tom Ianucci [Revere’s principal] to fail his children year after year.”

“This is about keeping our children safe,” said Rodman, who has two boys at Revere. “I just sat down with the principal and asked, ‘What can I do to help?’”

He thanked the school’s parents and Re- vere’s Lori Vogel and Ianucci for their assistance. He added that since his younger son is a sixth grader this year, he’s willing to continue helping for a few more years.

Emcee Sam Lagana noted, “When I went to Revere, there were 25 buses that came over to the Palisades and picked us all up.”

When Marquez Elementary parent Jenny Hogue presented the Sparkplug award to Steckmest, she thanked the garden teacher for fostering her fifth grader’s interest in growing vegetables and using them in the kitchen. “It was amazing to see my son make salsa, and he loves kale smoothies. Who knew?” Said Steckmest, a Sparkplug winner in 2006 and Citizen of the Year in 2008: “It’s a pleasure to be here. I work with some of your kids and some of your grandkids.” This year she was saluted for her gardening program at Marquez, which started with second grade and now includes kindergarten through fifth grade.

Her message to the more than 120 people assembled: “Eat your vegetables and garden with your kids/grandkids.”

LAPD Officer John “Rusty” Redican introduced Klopper, who received the Pride of the Palisades award for her efforts to help the “Pretty Blonde,” a homeless woman in the Palisades.

“She [the woman] was getting worse and worse,” Redican said. “Klopper created and executed a plan to get her off the streets. I firmly believe this saved her life.”

Klopper thanked members of the PPTFH, the enforcement team and the neighbors who helped the homeless woman.