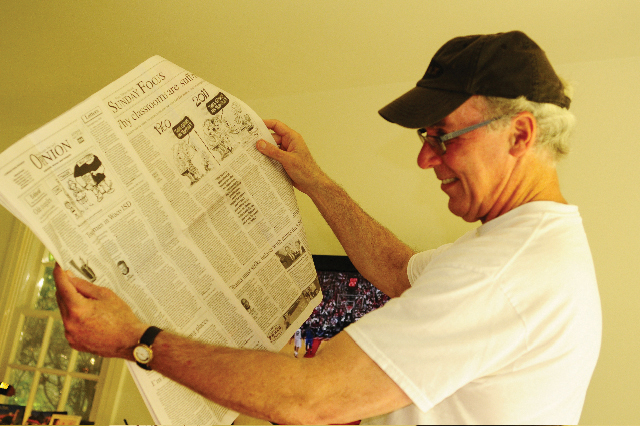 By Bob Vickrey
Special to the Palisades News Columnist

Chris Erskine of the Los Angeles Times has become a trusted friend in recent years, although we’ve never actually met.

Reading his funny and gentle family-themed columns has become an addictive habit for me as I sip my morning coffee.

Some people like sugar and cream with their morning brew, but I prefer a daily dose of “Erskine” with my coffee. Before Chris, there were Al and Jim— better known in Southern California as the late L.A. Times’ columnists Al Martinez and Jim Murray. Those talented writers always helped connect me with the world at-large with their personal and humanereflections about daily life.

Yes, I’m probably out of step these days with most folks, as American readers have slowly abandoned the traditional print version of the news and have opted for online access to the happenings of the day.

In fact, when a young friend of mine catches me with my head buried in the sports section, she loves to tease me with her familiar refrain, “So, I see you’re once again catching up on yesterday’s news.”

Let’s face it, these days most people get their information from television cable news and—to a lesser extent—network news, whose influence has diminished dramatically in recent decades.

But social media, principally Facebook, has become the major source of news and information for more and more Americans—and you wonder why the country is in such turmoil?

As I sit in my local café at breakfast each morning, I notice that I’m usually the only person in the restaurant reading a newspaper.

Most of the other customers are “reading” their phones instead.

My love of newspapers began at an early age. When I was a young boy, I raced down the driveway each Sunday morning for our copy of the Houston Chronicle, so I could retrieve the “funny papers” and then listen to my favorite comic strips being read on the radio.

I loved reading the sports section about my favorite college and professional football teams and then calling friends to share the stories with them. The habit became a communal experience during school days as we boys quizzed one another on sports trivia, while displaying a game of one-upmanship as to who was most informed about the news of the day.

All these fond memories make it even sadder to acknowledge what we have witnessed in recent years regarding the shrinking number of daily newspapers across the country. Digital technology has taken an unforgiving toll on all varieties of print media. Newsroom staffs have been slashed due to decreasing advertising revenue, which has resulted in steadily declining page counts.

My own early interest in newspapers led me to pursue a career in journalism, but I soon learned that becoming a good reporter required a commitment far greater than I had first imagined.

My college journalism professor demanded such dedication in pursuit of accuracy and definitive facts on each assignment that I still hold the profession in much higher regard than those leading the current wave of cynicism and doubt that exists regarding the profession.

In time, my own fondness for the written word landed me in the book publishing business after a very short stint as a newspaper reporter. I never truly believed that I had the “right stuff” to be an outstanding, hard-nosed reporter.

After an almost forty-year “detour” inpublishing, I found my way back in recent years to writing columns for several newspapers.

But most of my contributions are intended to entertain, and hopefully lighten the daily load for readers. I’ve decided to leave the heavy lifting to more serious journalists.

Here’s hoping that we never forget the important role newspapers still play today—whether in print or digital form—in informing us about vital issues that affect our everyday lives.

Through the years, newspapers have contributed in elevating the quality of our lives by informing and entertaining us and reminding us of our common connections and fundamental humanity.

I’m certainly not dismissing the importance of the emergence of the digital world, but for many of us, enjoying the tactile experience of holding the printed word in hand is still a fond habit that never seems to grow old.

Laugh if you will, but when I wake up tomorrow, I’ll be racing down my driveway to retrieve my newspaper just like that young boy of long ago.

Okay, maybe “racing” might be an overstatement these days. “Strolling” is actually closer to the truth. But either way, I’m counting on that paper being there for many years to come.

Bob Vickrey is a longtime Palisadian who is a regular contributor to the News. He also writes for the Houston Chronicle and the Waco Tribune-Herald.