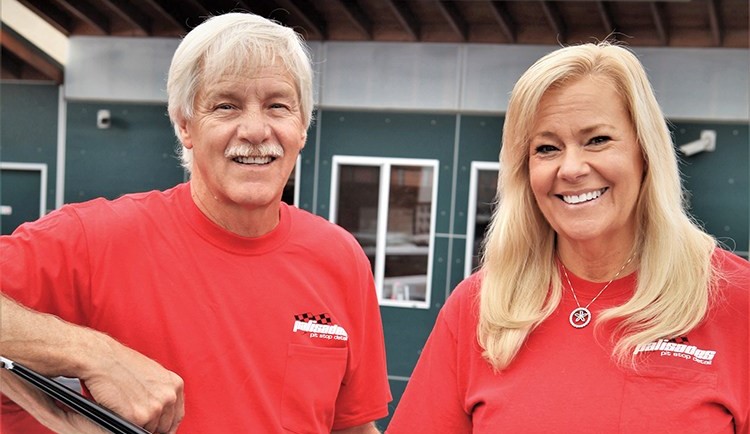 Maybe you have returned home from a road trip and your car is not only dusty, but is littered with food wrappers, empty bottles and other debris. Or, maybe the food that lodges under kids’ car seats has turned the back seat of your car into a petri dish of odor.

Not to worry. Marilyn and Gary Mons of Palisades Pit Stop, located at 15233 1⁄2 La Cruz Dr., not only have valet service (they will pick up your car and deliver it back to you), but can do a compete detail of your sedan or SUV in four hours or less.

A useful service the Pit Stop offers for this family-friendly town is special child’s car-seat cleaning—everything from sanitizing and disinfecting to stain removal and a vomit/potty-accident treatment.

The Mons bought the professional auto detailing and car washing business from Alex and Seth Zorensky in October 2016. Although the new owners were retired, “we were looking for something to fill our time,” Marilyn said.

“Retired is the worst word,” Gary said. “This is a time when you can reinvent yourself, a chance to re-create yourself.”

The two met through friends when they were 20 in Redondo Beach, where they had grown up. But they didn’t get back together until about 16 years ago.

Marilyn had attended Harbor College and then El Camino, with plans to work with animals, but along the way married into a family that had auto body shops. She would work for the next 25 years in a shop in Torrance.

Gary, who was born in Manchester, New Hampshire, moved here as a child. After high school, he spent the next portion of his life in the aerospace industry. “I’m a self-taught engineer,” he said, noting that he even sat in a mock-up of Howard Hughes’ Spruce Goose before it was built.

He started at Garrett Air Research as a machinist before moving to Rockwell, where he worked on the B-1 bomber. From there he moved to Culver City and worked on the Apache attack helicopter.

“I went to Hughes next,” Gary said, “and built reflectors for DirecTV.” Hughes was purchased by Boeing, and Gary continued to work as a senior scientist until 2015, retiring after 40 years. “Every company I worked for was bought out by Boeing,” he noted.

After Gary and Marilyn had separated from their respective spouses, they were reintroduced in 2008.“We hit it off,”Marilyn said.

The couple moved to Ventura, bought a house and spent time fixing it up. They traveled through Europe. But after return- ing home, they they found they had time on their hands.

“I want to keep busy,” Gary said, and after looking for businesses, they found Palisades Pit Stop (located behind the Palisades Garden Cafe and the Chase Bank building).

“We fell in love with this community,” Marilyn said, and after eight months of commuting, they decided to move to the Palisades.

“We put an offer on a place in the Highlands,” Marilyn said, “and they accepted our offer that same night.” Once that happened, they listed their home in Ventura and 15 minutes into the first showing, someone made an offer.

“It was a good move for us,” Gary said, noting that they’ve met all sorts of people here from all different walks of life.

“Our business and crew and our customers make us so happy,” Marilyn said. “Our long-time, trained staff go over every part of each car to clean it and make it beautiful.”

“We take pride in our work,” said Gary, who pitches in and helps his crew. “We’re all about the quality and taking time to do it right.”

On February 14, Gary and Marilyn married. “We had planned to get married in Buerge Chapel at Aldersgate,” Marilyn said.

But “When we went down to City Hall to get our license,” Gary said, “I had totally forgotten it was Valentine’s Day.”

The place was packed with people getting married, so the two decided to tie the knot there. They had a reception back at their home for friends, family and the couple’s six adult children.

Then it was back to the shop, with a romantic honeymoon getaway planned for the future.

By May 11, 2018
in Uncategorized
Related Posts
Comments
Leave a ReplyCancel reply