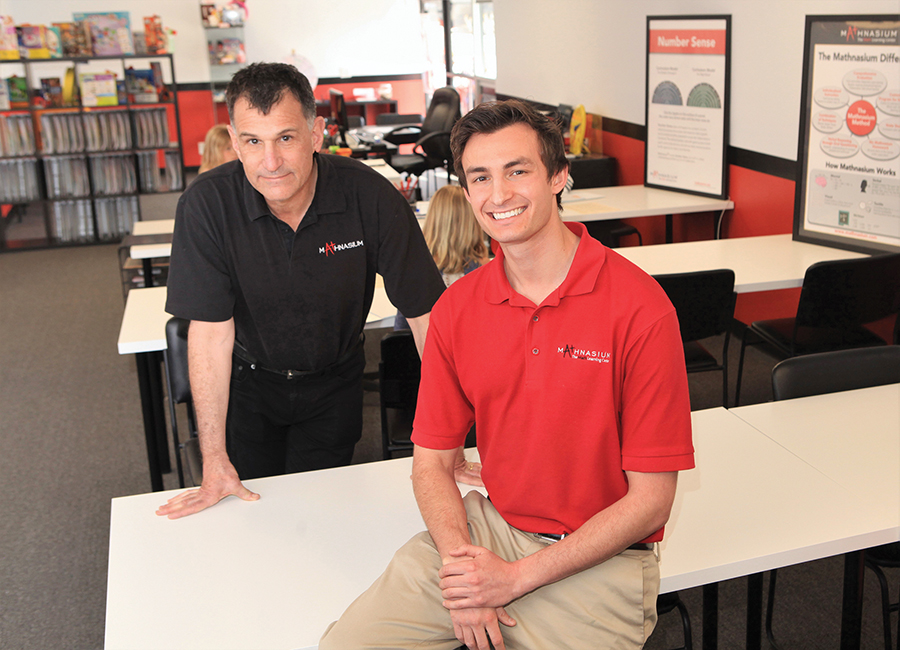 “Building confidence, that’s far and away the biggest goal,” said Skylar Kerzner, who recently opened a franchise at 15233 La Cruz. “Just feeling better about this whole math thing applies both to students who are struggling and kids who have maybe had it too easy . . . Maybe when a problem is hard, they’re very quickly intimidated.”

Kerzner’s new franchise opened in February and actually has more than one local connection. The parent company, which is approaching 1,000 franchises worldwide, is co-owned by Palisadian David Ullendorff, who began developing the concept of mathcentric learning centers in 2001.

He and his partner, Peter Markovitz, looked at curriculum and also talked to hundreds of people, including local teachers and both UCLA and USC education specialists, to help them transform the way students view math. They eventually were referred to math teacher Larry Martinek, whose approach appealed to them.

“I wanted kids to think of math as an art as much as a science—something they didn’t need to hate doing,” Ullendorff said. “We went in with the assumption that math is fun. We saw education not as a competition, but as an emotional experience. The kids will learn math initially not because they’re curious, but because they like the people who are teaching it to them.”

Using Martinek’s method as an inspiration, the business partners opened a first small center in Westwood, experimented with materials and also worked to ensure that the approach could be replicated and didn’t need to rely on Martinek’s prowess. By 2005, they had determined that other instructors could be just as effective, so they began to expand.

As they grew, Ullendorff ’s own children attended Mathnasium locations, including his youngest, Henry, 13, who is currently enrolled at the Palisades location. In addition, he and his wife, Alison, an attorney, enrolled their other children, Jonah, 20, who earned a perfect score on his advanced math SAT, Caleb, 18, and Abigail, 17.

Although high math test scores may be a product of enrolling in Mathnasium, they aren’t the goal. Understanding and enjoyment are, so students don’t memorize steps, but instead are guided to gain understanding, so they can use their skills on varied problems. The idea is also to learn by doing, just as people do when they work out at a gymnasium.

“You have to create an environment where they’re always doing math,” said Ullendorff, who grew up in Germany and moved to L.A. in 1993, then the Palisades in about 2002. “At a gym, you can’t stand around and watch other people work out. You have to actually do it.”

To help create this environment, the personality and motivation of each franchise owner is key. Before approving a franchise, Ullendorff meets each potential owner with the goal of finding people who care about students and are likely to invest personally in the business.

“You want the best person there—what he does every day is what’s really going to make the difference,” Ullendorff said. “The quality of the center director is the single most important factor” in the effectiveness of a location.

The Palisades center director, Kerzner, is someone who Ullendorff said both inspires and connects with his students. Overqualified like many Mathnasium owners, Kerzner has a physics degree from UC Berkeley and a master’s in applied math from UC San Diego.

Thus far, Kerzner has found that the earlier students can attend the better, because often students struggle and begin to think of themselves by high school as “not a math person.” He said, “I much prefer to have these kids come in fourth grade and actually become a math person.”

Students run the gamut from those who might have gaps and need catch-up help to kids who are bored with school math and benefit from moving faster.

When they arrive, each new student receives a free assessment, a free trial session, and then a binder to track their progress once they enroll. Students attend as much or as little as they desire, usually 2-3 times per week for a monthly fee ranging from $399-$459 per month. Each student then progresses through the curriculum at variable rates with a goal of achieving mastery in each topic. Throughout, they frequently interact with the instructors.

“The students are constantly engaging about math—doing problems, but frequently having conversations about them,” said Kerzner, who first worked as the center director in Manhattan Beach. “That’s why I like Mathnasium so much. You’re not just sitting there doing worksheets for an hour. You’re also not just talking about math.”

In addition, there is a fun factor, because as students complete worksheets, they can also earn prizes ranging from squishies and stress balls to a razor scooter or Lego set.

The Palisades Mathnasium is open Monday-Friday from 2 to 7 p.m. and Sundays 1 to 5 p.m.