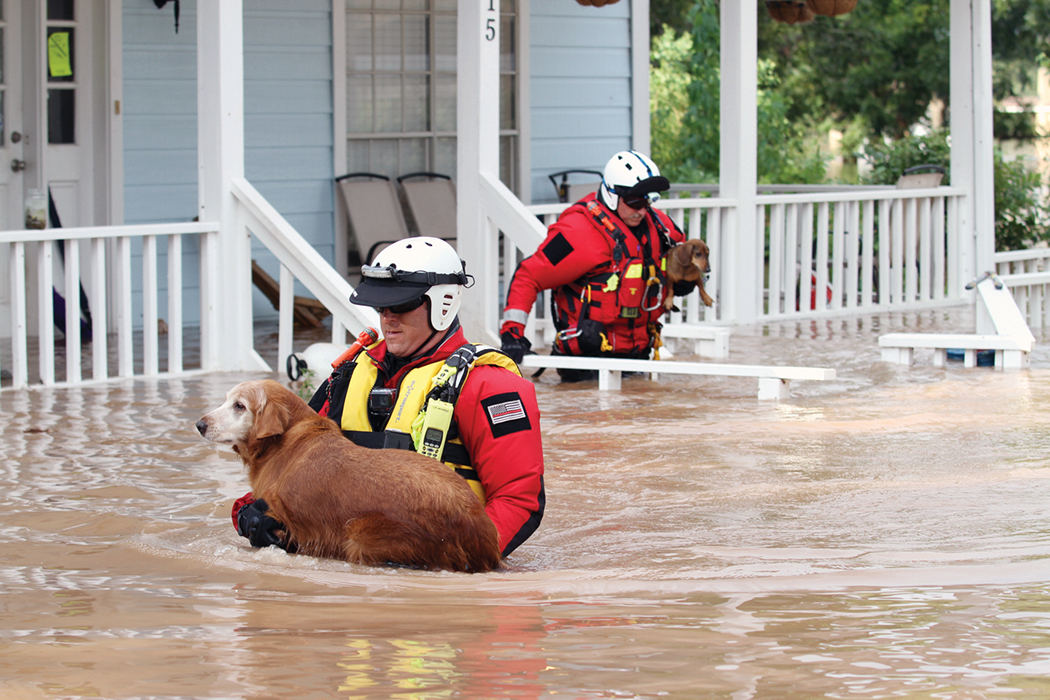 Captain Tom Kitahata, a father of three, has been a firefighter in the Los Angeles Fire Department for 30 years. Just over a year ago he joined Station 69 (corner of Carey and Sunset), serving as one of two captains of the B Platoon.

Kitahata is also a member of FEMA’s California Urban Search and Rescue Task Force. “We’re part of a national group of task forces all over the country,” said Kitahata, who has been part of the team since its inception in 1993. “It started when we had the need for earthquake preparedness. We had already started the team when the Northridge earthquake happened. That was our first incident and it happened in our own backyard.”

This past August, Kitahata was deployed along with 80 L.A. firefighters and civilians to help with the aftermath of Hurricane Harvey in Houston and Hurricane Irma in Florida.

Harvey slammed into Houston on August 25 and dumped more than 60 inches of rain on the city in four days.

Kitahata had previously worked the aftermaths of hurricanes Katrina (2005) and Gustav (2008), among others.“Houston was different in that it was just standing water,” he said. “We took our rescue boats and we just picked people out of their houses.”

Residents weren’t in immediate danger, but after a few days of no water or power they needed help. “The water in Houston wasn’t going anywhere because it was in a low area,” Kitahata said. “People were trying to wait it out, but the water just wouldn’t drain.”

Kitahata and his team spent two weeks in Houston, but as they prepared to return home, Hurricane Irma made landfall in Florida on September 10.

“[We went] straight from Houston to Florida, back to back,” Kitahata said. “We got demobilized from Houston, and they started sending us home and then turned us around.”

In Florida, Kitahata and his team were some of the first responders in Key West, which took the brunt of the hurricane. There they faced a different kind of damage compared to Houston. “The tidal surge came in, and it damaged a lot of houses,” Kitahata said. “A lot of the area was swept away.”

The fire captain knew right away that the residents were old hands at dealing with hurricanes.

“You can tell that people have done this before . . . All their stuff was on the second floor. The first floor was concrete pillars and their garage. The ones that did stay knew that they’d make it through.” A week after Irma, Hurricane Maria made landfall in Puerto Rico. “We got alerted to go to Puerto Rico, [and] we started packing up for that, but then we didn’t go,” Kitahata said.

The FEMA team is deployed most often to post-hurricane relief work, but also works other national disasters including Ground Zero after the September 11, 2001 terrorist attack.

“It seems like we get called now more for the hurricanes than anything else,” Kitahata said. “Lately we’ve been called maybe every other year.”

Along with the FEMA team, the LAFD also responds to disasters all over California. “We have our regional teams, which are our smaller teams,” Kitahata said. These teams respond to fires and other disasters, like the Orville Dam overflow.

Most recently Kitahata was sent along with his Station 69 engine team to help with the mudslide recovery efforts in Montecito.

“I got sent up as a manager for a search dog team,” he said. “We went into different areas, searching out the homes and the victims or where they thought they would be.”

Kitahata spent a week searching for sur- vivors. “It was rough,” he said.