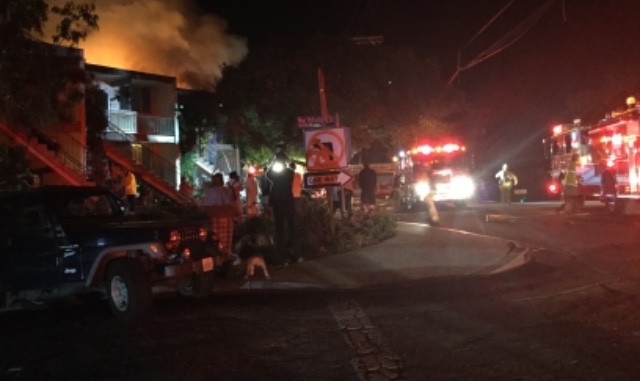 “Help! Fire!” were the words that woke Will Saunders around 5:30 a.m. on January 18. He and his wife rushed outside of their apartment and saw an upstairs apartment on fire in the eight-unit building located in the 16100 block of Sunset Boulevard, between Northfield and Las Lomas.

Saunders grabbed a fire extinguisher and, with his wife, rushed to help the woman out. As soon as she was safe, he went back into her apartment to try to extinguish the fire.

“I crawled under the smoke,” he told the News, “but the bedroom was completely engulfed, and I got out of there.” Saunders, who is originally from New Jersey, said his dad was a firefighter.

He then knocked on the doors of people who lived in the apartment complex. “Some people were still asleep,” said Saunders, who noted that the man living in the apartment directly under the fire was not home.

Saunders next went to find the emergency gas shutoff to the apartment building. There wasn’t one, and to shut it off required a wrench. When the firefighters arrived, he showed them the gas shut-off valve.

As firefighters set up on the corner of Sunset and Las Lomas, the trucks and hoses were situated in the eastbound lanes of Sunset. Palisades Patrol was also on scene.

Cars were running over the fire hoses, and Palisades Patrol Sergeant Machdo, who used to work for the fire department, knew that was a problem. Immediately, he called DOT to send someone to direct traffic. In the meantime, he and patrol officer Valdes took over traffic control so that the firefighters could do their job.

DOT had not arrived when the News left the scene at 7 a.m. Eastbound Sunset was closed until about 8:30 a.m.

According to LAFD, there were no injuries and the fire was caused by an electrical problem. The woman in the apartment initially tried to put it out, before calling for help. Her apartment was gutted, and she is receiving assistance from the American Red Cross.