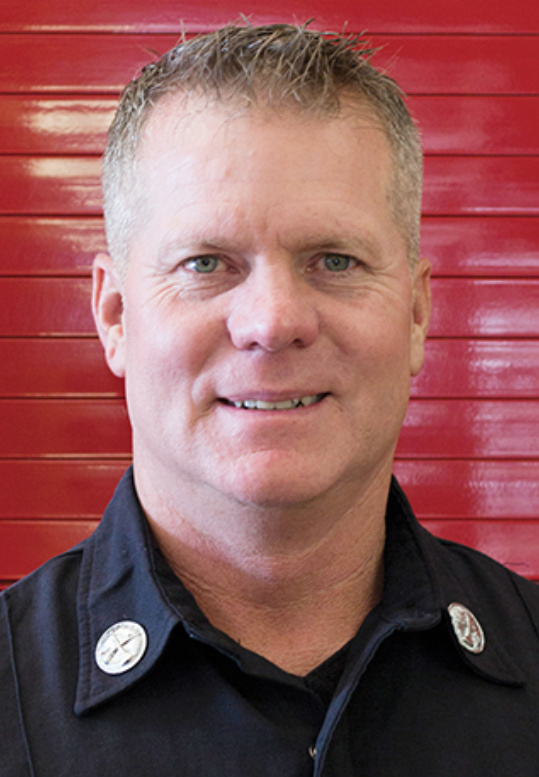 Brown, who has served the L.A. Fire Department for almost 30 years, transferred from North Hollywood Station 60, where he’d worked for 17 years in three different ranks. He currently serves as co-captain of the B-Platoon, alongside Captain Tony Valdez.

Brown was raised in Chatsworth and comes from a family of firefighters. His father was a captain for the L.A. County Fire Department, and two of his brothers and one of his nephews served the LAFD.

After attending junior college, Brown joined the LAFD because he felt driven to serve his community.

“There’s so much reward in being able to help others,” he told the News. “The job satisfaction is huge. When people call us, something bad is happening to them. It might not seem bad to us, but it’s bad to them.”

Brown worked his way from firefighter to engineer (fire engine driver) and finally to Captain II in 2005. The difference between Captain I and Captain II is that he serves as the Task Force Commander, meaning that all the responsibility falls on him if anything should go wrong.

Brown loves working at Station 69 (corner of Sunset and Carey). “They’re all sen- ior guys who are well-trained, educated, and top-notch guys,” he said. “There’s a great team that’s been built here.”

Along with serving the LAFD, Brown was also part of FEMA’s Urban Search and Rescue Task Force for 10 years and worked the Los Angeles riots in 1992. Most recently he was in the Santa Barbara area for two weeks in November battling the Thomas Fire.

“It looked like the Los Angeles riots,” Brown said. “Everything was burning, and we had to choose to save this house or the one across the street.”

He currently helps train new recruits and is on the interview board for new engineers. He has no plans to retire anytime soon, noting “I’m looking to be here for eight or nine years.”

Brown lives with his wife of 25 years in Newbury Park. They have two daughters, ages 18 and 21, who attend UCLA, and a son,16, who aspires to be a firefighter like his dad.