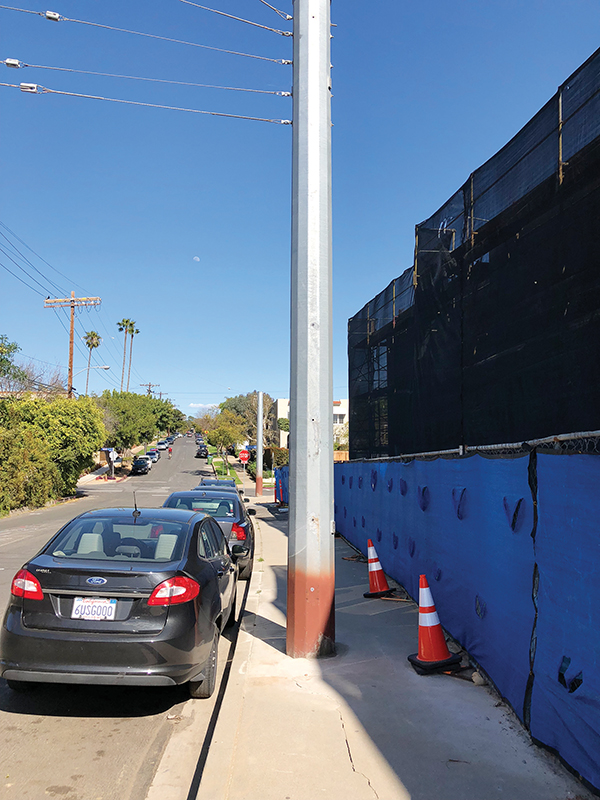 At the March 22 Pacific Palisades Community Council meeting, a resident living adjacent to Caruso’s project asked why the contractor’s original plans showed electrical utility boxes placed off the alley entrance at Bashford, but that these boxes have actually been place on Albright, at the intersection with Monument.

Michael Gazzanno, the Palisades Village project manager, who had earlier shown a video at the meeting, declined to answer questions, instead sending residents to the Caruso website for answers to various questions that had been raised from within the community.

On the website (palisadesvillageca.com), the electrical question was answered: “Plans that are prepared for entitlements are conceptual-level designs. Engineered drawings are not developed until after the city approves the project and the applicant meets with various agencies to confirm how the literally hundreds of building, electrical, mechanical or other codes will be applied to the project.

The News contacted DWP spokesperson Carol Tucker, who responded: “The location of the equipment is chosen by the customer. They can install it wherever they choose as long as it meets certain LADWP requirements for safety, construction and maintenance access, and electrical equipment clearances. Some building owners have chosen to place this equipment above ground (as in this case), below ground in a basement or vault, or in a room.”

Tucker continued,“Whether to locate the equipment above or below ground is not determined by LADWP. It is a decision made by the customer in coordination with city Building & Safety and potentially City Planning.”

Meanwhile, three steel poles have been placed in the middle of the sidewalk on Albright, just west of Monument. There is no sidewalk on the north side of the street, so anyone walking on Albright must avoid the poles.

Tucker was asked if the poles were permanent. “Yes, they replaced wood poles that were on private property, close to their new locations.”

The News asked why the poles, which were formerly on the Caruso property, didn’t stay there. Tucker explained that because the wood poles no longer brought electricity to the Caruso project they were no longer needed.

“The original poles were removed and replaced with the new steel poles whose only function is to provide structural support for the poles on the north side of the street,” Tucker said. “As a general policy, we design the electrical infrastructure, including power lines and poles, in the most structurally sound, safest and cost-effective manner possible.

“The new poles [called guy stubs] are necessary to provide support to the poles/lines across the street, mainly because there is a slight curve in the road that creates a strain on the lines heading north.”

Tucker said there were two other, more costly alternatives: 1.) replacing the existing poles (north side of the street) with engineered steel poles that would not require guy stubs, but that solution might require an easement since the footprint of the engineered steel poles are larger, and 2.) converting all the infrastructure on the north side to underground, also more costly, because converting electrical equipment from over- head to underground can cost more than $1,000/foot, and the stretch along Albright is more than 800 feet.