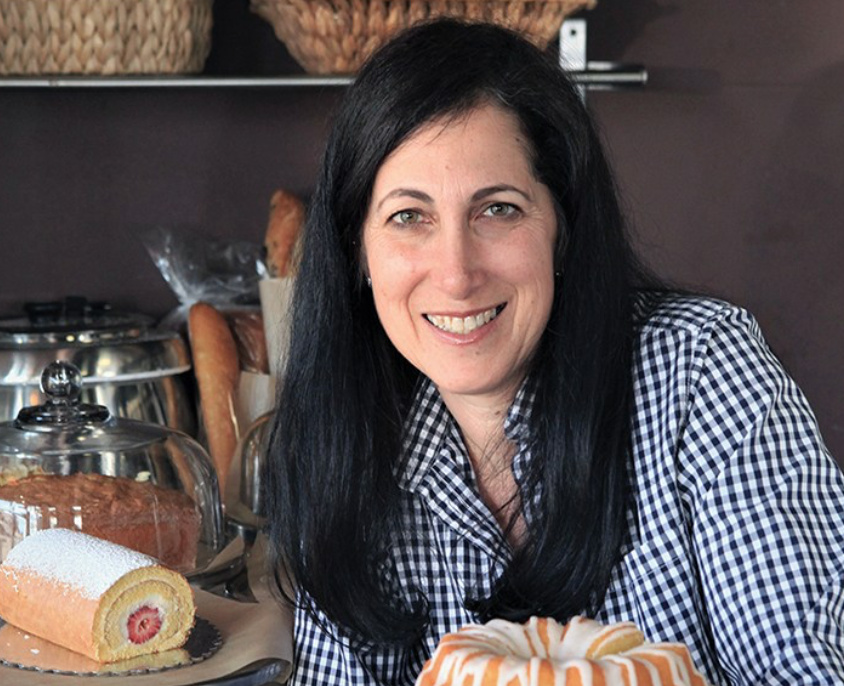 Kim Kedeshian, who owns K Bakery on Sunset and plans to open a Mediterranean-themed restaurant in the 970 Monument building, has received the Bob Sage Business Person of the Year Award from the Palisades Rotary Club.

Kedeshian’s restaurant, Armav, will fill a long empty space off the patio on the first floor, close to Caruso’s Palisades Village project.

Her bakery, located just north of PCH and Vons, is a thriving business with 19 employees.

Kedeshian, originally an appellate lawyer who received a degree from Pepperdine and passed the bar in New York and California, began her business in 2007 after tasting a Bundt cake.

“I can make a better cake,” she said, and worked on her own recipe until family and friends provided rave reviews.

“I think we could sell these,” Kedeshian said, and with a partner began making various Bundt cakes and selling them at boutiques and by word of mouth. Her husband Paul, a physician at UCLA, gave them away as gifts.

The cakes’ reputation grew and then “We were shipping them all over the country,” especially in November and December, Kedeshian said. “We were working out of a commercial kitchen located at Pico and the 10 Freeway.”

A friend introduced her to the owner of The Yogurt Shoppe on Swarthmore and, in 2010, Kedeshian started baking brownies for

the shop. By then, her initial partner wanted a break, so Kedeshian went on her own.

In the summer of 2011, Kedeshian was driving with her husband down Sunset when she saw a “For Lease” sign in a storefront in the mini-mall near Vons.

She called her mom and said, “I’m just going for it,” and within 30 days she had K Bakery up and running in the 600-sq.-ft. space. “There were four of us: a baker, a counter person, my mom and me,” Kedeshian said.

Kedeshian speaks about the value of employees. “When you find good people, you have to work to keep them.” Her initial baker stayed three years until moving back to Ohio where she opened her own bakery. “We both just learned.”

As Kedeshian’s business grew, she realized “The number-one priority is how you communicate with your employees.”

She also studied other business models, such as In-N-Out, because “it’s a family business and they stay true to what they do.”

K Bakery’s first savory was a chicken pot pie, which came on the menu in 2013.

“Food is emotional,” she said. “When I was growing up [in South Pasadena] and my parents went out, it was a big treat when the babysitter made a chicken pot pie. I was nostalgic about it, but I thought I could do it better.”

Now, it is one of her top sellers. The bakery’s popular oatmeal bar “is what my grandmother made,” Kedeshian said, “and the date bread—my mom and grandma used to make it for a festival in the desert.”

Spending time running her business and baking breads, cupcakes, cookies and bars left Kedeshian little time to pack lunches for her kids (now 19, 16 and 12), so she started making soups to send as lunches.

Their friends were soon asking for the same lunch. “It was a groundswell from my kids’ friends,” Kedeshian said, noting that before the end of the school year in 2013, K Bakery was delivering about 60 lunches daily to Calvary Christian School. “I had people calling and it was bedlam.”

Kedeshian then took her next business step. “We set up K Kids and approached Calvary about doing lunches [for the entire school].” After doing a tasting for 100 people, she was awarded a contract for lunches three days a week.

“We hired a chef primarily for the kids,” said Kedeshian, who now has a K Kids account at five schools: Calvary, St. Matthew’s, Seven Arrows, Montessori and Pacifica High School. The K Bakery kitchen is open from midnight to 10 p.m.

The lunch program was so successful that families started requesting dinners. Kedeshian responded by preparing dinners that could be delivered or picked up, not only because there was a need, but because “my own family needed dinners, too.”

Today, there are different dinner menus each week; a recent menu featured not only a choice of seven different salads and a daily soup, but also “Take-Me-Home” meals, such as a cheese and spinach lasagna roll, barbecue turkey meatloaf, and chicken and seafood pot pies. All include salads.

Additionally, there are daily specials that are the equivalent of a four-course meal. A sample might include Parmesan chicken cutlet, stuffed grape leaves, pan-seared sea bass, steakhouse dinner, and grilled Mediterranean chicken skewers. One has to call in 24 hours in advance or email info@thekbakery.com.

“I feel like it’s a community business,” Kedeshian told the News. “A business isn’t a business without the community.”

How did her law career prepare her? “One of the reasons I can do this is because of my background. My legal background is a fabulous extension of a liberal arts education — it promotes thinking critically.” It also means she can read and negotiate her own contracts. Her mother and business partner, Katherine Dagermangy, lives in Pasadena but is in the Palisades almost every day. “I do a lot behind the scenes,” Katherine said. “Wherever I’m needed I’m there. But this is Kim’s dream in life.”

Last December, Kedeshian received a call from a new client who wanted 1,000 decorated gingerbread-people cookies in two days. First, she spoke to her employees to see if everyone was willing to work the overtime it would take to complete the order. Once everyone was on board, they started baking, then decorating—and Tesla received the cookies for its employees on time. Kedeshian hopes to open her new restaurant by September 1, while maintaining K Bakery at its current location.

Armav, which means date in Armenian, will be open for breakfast, lunch and dinner in a 2,500-sq.-ft. space. “I want it to be warm, inviting and a family restaurant,” she said.

Some days, there’s little sleep for Kedeshian, because she’s always on call as she balances the bakery, the takeout/delivery menu, school lunches, her family and preparing for the new restaurant. Still, “I love it, I couldn’t imagine doing anything else,” she said. “Even on a really bad day, I still love it.”