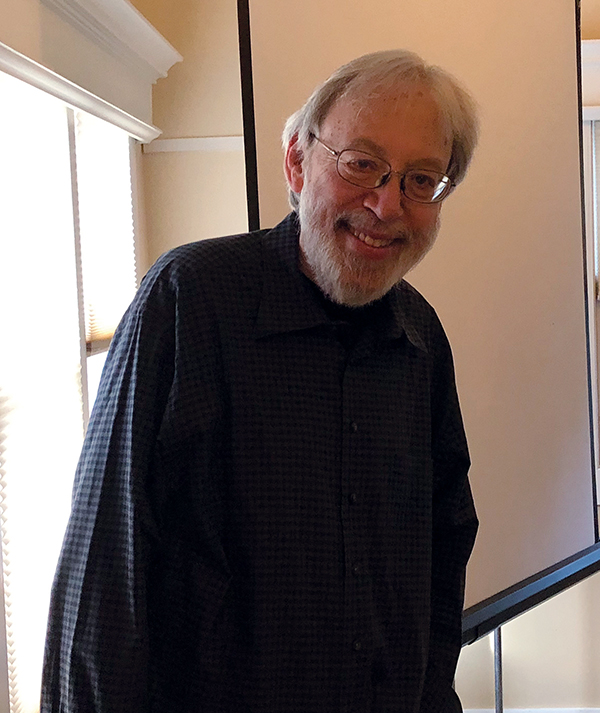 By Bill Bruns and Sue Pascoe

L.A. Times film critic Kenneth Turan made his annual appearance at the Pacific Palisades Optimist Club meeting on February 6 to talk about the March 4 Oscars ceremony. The book author and Palisadian addressed a packed house at Aldersgate.

“You will never hear me say, ‘This will win because of best performance,’” Turan said. “Everyone’s idea of what is the best performance is different, and favorite doesn’t mean winner. There are upsets every year.”

He explained how members of numerous crafts inside the Academy of Motion Picture Arts and Sciences academy select the nominees, such as for film editing, costume design and special effects, but then the entire Academy votes for each of the 24 awards He also noted that following the 2016 Oscars (dubbed #OscarsSoWhite), the Academy vowed to double its female and minority membership by 2020, while also skewing younger.

With the changing demographics of the Academy, Turan said, it might be more difficult to predict what typically will win an Oscar. His selections are not necessarily based on what he felt was the best film/ actor/actress, but rather predicting what he thinks 8,000-plus Academy members will choose.

Despite his warning not to let one’s heart color who to select in the office pool, Turan is pulling for “The Shape of Water” to win Best Picture honors.

“The favorite has to be ‘Shape,’” he said, noting that it received 13 nominations, including seven of the eight technical nominations, which means “it has support from both sides of the Academy.” But, he cautioned, “Looking at the history of the Oscars, the film that has the most nominations hasn’t always won best picture.

“I’m hoping it will be ‘The Shape of Water,’” Turan said. “It’s a magical film, beautifully made,” by director Guillermo del Toro.

The film is a fantasy tale of a woman whofalls in love with a fish-man creature captured in South America in the 1950s. One Optimist asked if the fallout about the story idea being stolen might hurt its chances.

“Most people do not believe the story was stolen,” Turan said. “Guillermo said it was inspired by the “Creature from the Black Lagoon.” He remembers wondering as a child when he saw the film, ‘Why does the creature never get the girl?’”

Another optimist asked about the chances that “Three Billboards Outside Ebbing, Missouri” might win Best Picture. “I like it; I gave it a positive review,” Turan said. “But it’s a film that has split people, and the director didn’t receive a nomination. Those films [where the director is not nominated] generally don’t win.”

The Best Actor category includes five top-notch performances, Turan said, but he believes Gary Oldman (who plays Winston Churchill in “The Darkest Hour”) will win because “every so often the Academy uses this category to give a ‘lifetime achievement’ award.”

In the Best Supporting Actor category, “Sam Rockwell does a great job [in Three Billboards]; he’s the favorite,” Turan said, “but Woody Harrelson is in the same film, and they could divide the vote, leaving Christopher Plummer [All the Money in the World] to sneak in.”

“Best Actress may be the strongest category, and is a toss-up,” Turan said. “Frances [McDormand, in “Three Billboards”] has won before and is an actress the Academy likes, but Sally Hawkins [“Shape of Water”] is terrific.”

Turan said that Best Supporting Actress could go to either Laurie Metcalf [“Lady Bird”], “who is highly respected,” or to Allison Janney [I, Tonya], the word-of-mouth favorite.

He predicted that Guillermo del Toro will win the Oscar for Best Director, and the popular “Coco” will capture Best Animated Feature Film honors.

For Adapted Screenplay, Turan predicts that 89-year-old James Ivory (“Call Me by Your Name”) will win—“the Academy likes to support someone who’s still working at that age”—and for Original Screenplay he favors writer/director Greta Gerwig for “Lady Bird,” a movie he called “original, moving and unexpected.“I’ve seen enough of the unhappy teenager, coming-of-age films that I would never have to see another,” Turan said. “But this was so exceptionally well-done that I really liked it.”

In the Best Foreign Film Category, “the one I really liked was “Foxtrot,” and I’m sad that it wasn’t nominated,” Turan said. “It’s a very glum list” that includes “Loveless”— “a sad title for a sad film”—and “Body and Soul,” an Hungarian film about two workers in a slaughterhouse who discover they are having the same dream every night. “I don’t think it’s going to win, but it’s a really fine film.”Before he left, Turan warned the optimists that favorites often shift right up until the time votes are cast, and that early favorites don’t always end up winning Oscars.

(Editor’s note: Kenneth Turan is also a film critic for National Public Radio’s Morning Edition as well as the director of the Los Angeles Times Book Prizes. A graduate of Swarthmore College and Columbia University’s Graduate School of Journalism, he teaches film reviewing and non-fiction writing at USC. His most recent book is Not to Be Missed: Fifty-Four Favorites From a Lifetime of Film.)