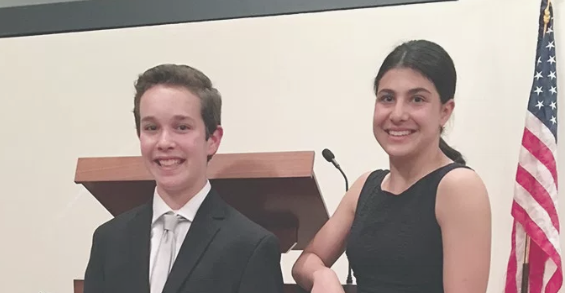 “Optimism is the hope that things can get better, and they will. Optimism is constantly maintaining a cheerful outlook on life, even when life may not seem that cheerful,” said Julia Abbott, who won the Optimist Club’s oratorical contest on March 20 at the Palisades Lutheran Church.

This year’s topic was “Where Are My Roots of Optimism,” and speeches had to be four to five minutes long. The emcee was Palisades High School senior Daniel Gottesman, who won the local contest two years ago, then went on to win the Zone and District contests before competing at the international event in St. Louis.

The annual contest is open to any contestant under the age of 18 who attends public and private school or is home-schooled. The first-prize winner received $200 and second place earned $100.

“It was wonderful,” said DeWeese, who noted that the contest was close between Abbott and runner-up Gottesman, with only a point separating first and second place. Both students attend Revere.

In her speech, Abbott spoke about her mother who was involved in a near-fatal traffic accident.
“I was standing still, not a tear in my eye as I held my sobbing three-year-old sister, looking at our mother’s still, almost lifeless body, fighting for every breath,” Abbot said. “It was at that moment that I thought about all the things I had never gotten to do with my mom.

“I grew more and more frantic, as I realized that I could stand to lose so many things in an instant. I realized how everything, every day, every moment was a gift. And that is when I swore to treat every gift with the deference it deserved.”

Abbot explained that her mother survived, but that the trauma changed the family. “It showed me you had to be happy and grateful,” she said, and concluded that “At the end of your life, you will miss the little things, so go appreciate them.”

Second-place winner Matty Gottesman explained that music has the ability to change the listener’s mood and as an optimist and musician “there is no greater gift than giving music.”

After hearing about a charity that brings virtual reality to kids in the hospital, he wrote, recorded and produced a song for those in the hospital. “It is incredible seeing the kids’ radiant smiles and wondrous faces when they put on headsets,” he said. “The truly amazing part is that kids who wear the headsets have less pain and anxiety in the days following.

“I know that when we work together, we can help improve the lives of others,” Gottesman said.

Abbott took first in the area competition and will advance to the District contest in Bakersfield.

By May 4, 2018
in Uncategorized
Related Posts
Comments
Leave a ReplyCancel reply