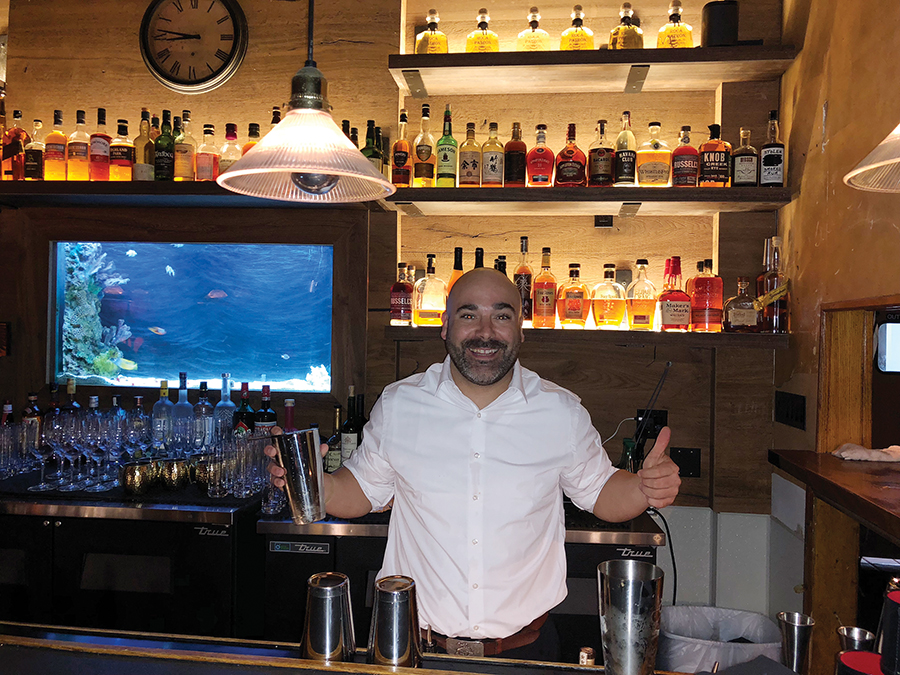 “The reports of my death are greatly exaggerated,” Mark Twain quipped when he learned a major newspaper had printed his obituary.

After a visit to the Golden Bull, whose January 1 closing was widely feared as the death of a popular neighborhood restaurant, the News instead describes it in Fats Waller’s words: “This joint is jumping, this joint is really jumping.”

The Golden Bull closed January 1, with a promise to reopen under new ownership on January 11—and it did.

So the News visited the Santa Monica Canyon eatery, joining friends and neighbors who were stopping by for drinks in the early evening. The kitchen crew was serving a limited menu, and three bartenders were on hand to keep patrons happy, especially those who have long savored the Bull’s old-fashioned cocktails.

“We’ve been looking at this spot for years,” said Pacific Palisades resident Chase Ahders, one of four men who have taken over the lease on the W. Channel Rd. restaurant.

He explained that Don Cranford, the Golden Bull’s owner for more than 40 years, had been approached by several investment groups who wanted to come in, make extensive renovations and change the name.

The ownership group also has Margo’s and Art’s Table, both on Montana, and Ashland Hill on Main Street in Santa Monica and manages Cole’s French Dip (the landmark saloon known for French-dip sandwiches and classic cocktails in Downtown L.A.). Cole’s was Verge’s first venture and was focused on preserving the restaurant’s vibe, including historic cocktails and the classic sandwich.

“This whole place needed some love,” Ahders said about the Golden Bull, which opened in 1949. “We wanted to keep it ‘old school’ comfortable.”

The quick overhaul included scouring the kitchen and installing new equipment. In addition, rotted shelving behind the bar was taken out and the area backlit, providing a more open feel. Same bar, only better.

On this winter night, the beloved fireplace was going, providing an intimate, warm setting.

For the next three to five weeks, only the bar area of the Golden Bull will be open, as the dining room is the next area to be “fixed.” The façade, booths and lighting will be refreshed and upgraded, and the idea is to carry the same intimate, cozy feel of the bar into the dining room.

Currently, the booths by the bar are available and there’s a limited menu, including burgers, pasta, steak and salads.

“We have the early-bird special,” Ahders said, explaining that every item on the menu is half-price from 5 to 6:30 p.m. “This gives people who are concerned about prices an option.”

Ahders, who has four children, predicts that a second group of people will come in between 7 and 9 p.m.—those in their 30s and 40s with kids.

He said there will be a kid’s menu, and different foods will be tested to see what stays.“If the kids want pancakes all the time, there will be pancakes on the menu.”

After the families leave, he thinks the Gold- en Bull will attract a third group of people, the “go by” crowd, meaning that it is place for neighbors to “go by” before heading home.

The owners plan to cater to the neighbor- hood with the Golden Bull’s menu. “We’ll have specials just to try things out,” Ahders said. “In order to have a neighborhood hangout, we need to know what the neighbors want.”

He explained that the former staff was invited to interview to stay at the Golden Bull. But some had worked there for decades and saw this as way to retire. Others, because there will be no need for dining-room waiters for at least another month, decided they didn’t want to be without work. Ahders noted that kitchen workers had been hired back, including a busboy and a cook.

The plan is that the Golden Bull will remain a neighborhood restaurant where “we know you and you know us,” Ahders said. “It will be fun. This will be the kind of place where we want to hang out.”

The new general manager will be Michael Christopher.

RESTAURANT UPDATES:
Sam’s by the Beach, 108 West Channel Rd., is closed and has been purchased by The h.wood Group. This group manages the adjacent SHOREbar, which is owned by Mark Verge. The h.wood owners, John Terzian and Brian Toll, also have Delilah, The Peppermint Club, Poppy and Bootsy Bellows in West Hollywood.

Kay ‘n’ Dave’s, at Sunset and Antioch, which was closed by a kitchen fire in October 2016, has still not reopened. The eatery has received a full-liquor license and the interior has been repaired, remodeled and painted.

Tivoli Café, 15306 Sunset Blvd., closed on November 26. At the time, owner Sohail Fatoorechi said he planned to be closed into spring as he updates the restaurant in the face of competition posed by Caruso’s Palisades Village later this year.

Roast, 548 Palisades Dr., posted a sign in its window that it would be closed in January for vacation, and would reopen with a new menu in February.

Palisades Hi-Tech, 970 Monument St., closed in January. (The large storefront across from Hi-Tech has been empty for years.)

The storefront at 871 Via de la Paz, occupied by Beckwith Insurance for many years, is empty—as is Ted’s bicycle shop, directly behind it.

The former Denton Jeweler store, which is supposed to be replaced by Banc of California, remains empty.

The former UDO Realty storefront between Garden Café and Seven Arrows is empty, and the space above Wells Fargo Bank is empty.

Juicy Ladies wrote in an April 1, 2016 Facebook post: “Pacific Palisades here we come!!!” Located at Castellammare Drive and Sunset, the space would offer a smoothie and juice bar. Last month, the owners post- ed that they were looking for juicers, cashiers and cooks for their Woodland Hills and Pacific Palisades locations.

When Keller Williams opened an office at 845 Via de la Paz last June, plans for an adjacent coffee shop/café, Estate Coffee, were announced. It has yet to open.