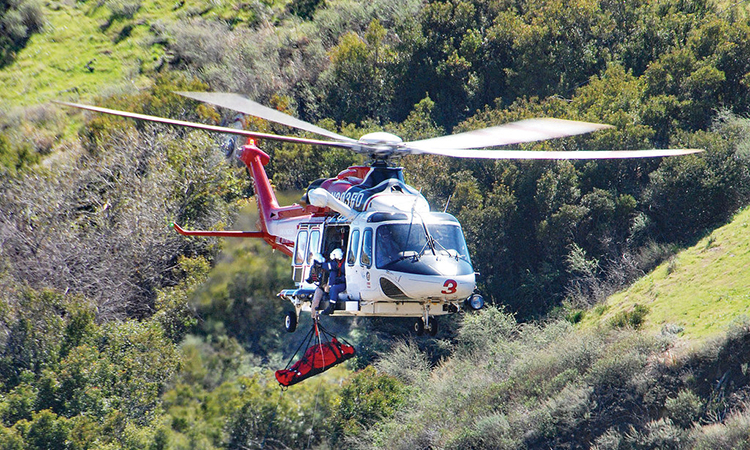 Have you ever gone hiking or mountain biking in our local mountains and witnessed an airlift firsthand? I’ve seen a handful of them and find them pretty amazing to watch, if rather loud.

Every time I see one I find myself wondering how the process works, so I contacted the Los Angeles Fire Department and spoke with Captain Tom Kitahata of Station 69 and hoist operator Joel Smith of Station 90 to find out more.

When a distressed hiker or mountain biker in Temescal Canyon, Will Rogers State Park, or Topanga State Park above the Highlands calls 911, the call goes out to either Station 69 or 23 and Air Operations Station 90 in Van Nuys, prompting an immediate response.

The air ambulance team at Station 90 jumps into action.“Approximately from the time we get the ring and travel down to the Palisades it’s 7 to 10 minutes,” Joel Smith of Station 90 told the News.

Simultaneously firefighters from either Station 69 or 23 try to reach the distressed person, even if they’re miles from a road.

Six to eight firefighters hike in carrying a rolled plastic stretcher, a backpack with medical supplies, a portable defibrillator, and medications like morphine in case the patient doesn’t want to be or cannot be transported by helicopter.

“The reason we do is that depending on where we are, we might get there faster,” Captain Tom Kitahata said. “Then we’re there to help package the patient.”

By “package,” Kitahata means load the patient onto the gurney and wrap them in plastic to protect them from the wind and the downwash from the chopper as they are hoisted upward.

Two helicopters from Station 90 respond each time. “For any hoist we have a hoist ship and a HELCO [helicopter coordinator] ship,” Smith said. “The HELCO ship flies above and positions itself where it can see the ground.” This is because the rescue ship can only coordinate with the HELCO ship, so the HELCO’s job is to see the victim and relay messages between the ground team and the other helicopter.

Although the Air Ops team responds to every 911 call, not every patient is airlifted. “We typically airlift individuals if they are unable to walk out on their own power or they have become stranded in locations that are too dangerous to attempt to walk out,” Public Information Director for the LAFD Peter Sanders said.

Some people opt not to be airlifted to a hospital. “It depends on the severity of the injuries and illness,” Smith said. “Some people don’t want be lifted.”

The types of injuries Stations 69, 23 and 90 respond to vary. “We go on quite a few mountain bike crashes and also for dehydration issues [in the summertime],” Kitahata said.

Smith says they have rescued people for all manner of reasons. “From my experience, there is a little bit of everything,” he said. “We go on a lot of lost-hiker calls.”

Adverse weather is the biggest hindrance to the helicopter rescues, especially fog. “We can’t do hoist operations if we’re flying in the clouds,” Smith said. “We have to see the victim on the ground.”

If the victim is airlifted, they are flown to a local hospital.“ Any of the area hospitals are within five minutes,” Smith said.

Kitahata says the most common one is UCLA’s Ronald Reagan Medical Center in Westwood because it has a trauma center and a good helicopter landing pad.

Ideally if the patient needs to be transported to a hospital they are taken by the helicopter because Los Angeles traffic can be a hindrance to ground ambulances.

If a patient is airlifted to a hospital it costs as much as an ambulance ride. “We do not charge the public to airlift them,” Sanders said. “However, if they are transported to the hospital via helicopter they receive a bill similar to one they would receive if they were transported by ground ambulance.”

So far in 2018 our local firefighters and Station 90 have responded several times to hikers in distress in the Palisades, the most recent happening last weekend.

“I would say overall, we probably respond to at least 20 to 30 times per year to the Palisades area, but only do actual airlifts a dozen times,” Sanders said.

As the summer approaches, firefighters say to plan ahead and be careful when hiking and biking in our local mountains. Make sure to bring enough water and wear proper hiking shoes because it gets hot fast and the trails are notoriously slippery. If you do need emergency assistance, do not hesitate to call 911.