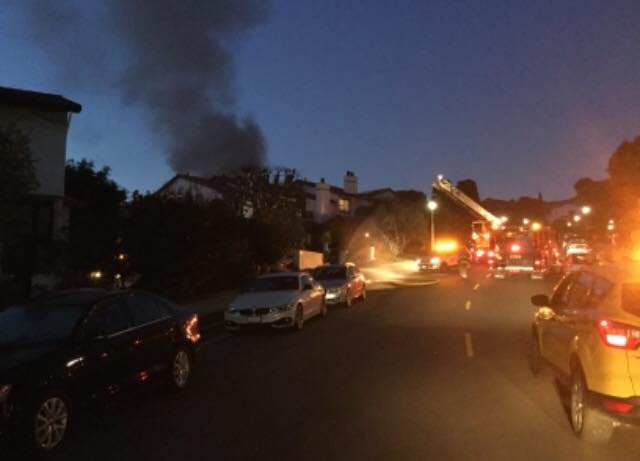 A fire broke out in the first-floor garage of a three-story townhouse in the 1600 block of Michael Lane in the Highlands shortly before 6 p.m. on Friday, Feb. 16.

According to Michael Lane resident Art Pearlman, someone cried “fire” and the residents jumped into action. A 911 call went to the Los Angeles Fire Department and Station 23 arrived first, followed by Stations 69, 19 and 63.

“They were up here within 10 minutes,” said Pearlman, who with other neighbors grabbed fire extinguishers and tried to put out the fire. “Everyone worked together.”

The firemen “are total professionals,” Pearlman told the News. “They got here fast, and I’m thrilled nobody was hurt.”

No one was at home when the fire broke out. Six fire engines, four truck companies, three Battalion chiefs, a helicopter and two paramedic rescues responded to the fire.

LAFD Chief Rick Combs said one reason for the large response was that the townhouse is location next to Topanga State Park and the wildland interface. “The fire started in the garage, which is under the two-story structure,” Combs said. “It spread into the walls and climbed vertically into the attic space. It burned everything in the garage.”

Combs said firefighters put plastic down, before they pulled off the sheetrock to access the fire. “We saved the personal belongings,” he said. “There was damage to the walls and the ceiling.”

The fire was extinguished in about an hour and 15 minutes.

If there is a fire in a building, Combs said, firefighters try to confine it to its origin, which means to close everything down. “Close down the windows, close the doors,” he said. “Keep the smoke, heat and fire out.”