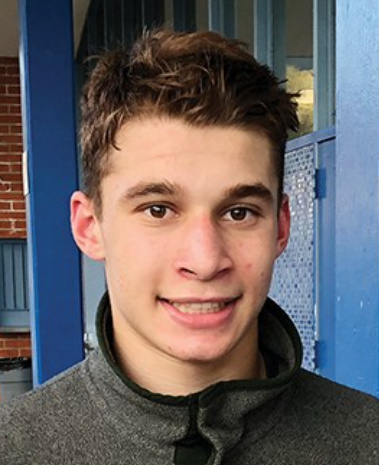 As a young boy, Aaron Galef played baseball, basketball and football at the Palisades Recreation Center. But then in middle school at Paul Revere, he started wrestling under coach Adam Hunter.

Why wrestling? “I was 4’10” and weighed 80 pounds; I knew I wasn’t going to be a starter in the NBA with my size,” said Galef, now a PaliHi junior. “My parents supported my decision because they knew if I put in the hard work, I’d do good.”

And he did. He won the 85-pound weight class championship in the middle-school league finals against Chaminade, Harvard-Westlake and Buckley.

Galef says wrestling has advantages because it’s a strictly one-on-one combat, and the win or the loss rests solely with the individual. “It’s not about losing because one person on a team didn’t pull through.”

Still relatively small (5’5” and close to 140 pounds), Galef usually has two workouts a day. One is on the mat practicing different holds and releases, the second is usually an aerobic or lifting workout. The night before he spoke to the News he had run two miles in 15 minutes. “Rain or shine I get a good run,” he said.

With the sport of wrestling, it’s about the balance of finding the maximum weight for the maximum strength. “I eat healthy,” Galef said. “In the evening I look in the mirror and ask myself ‘Did I work as hard as I could?’” At the Doc B tournament in January, he wrestled at 138 pounds and one of his first opponents was a ranked athlete (64 athletes are in each weight class). The match was tight, and Galef lost 5-3, but his opponent went on to wrestle in the championships. While dedicated to wrestling, Galef is also focused on academics. “I have all As and Bs,” he said. “The smarter I get in school, the smarter I get in wrestling.”

The son of Palisadians Marni and Michael Galef, Aaron has a fraternal twin, Jordan (6-ft. tall, 170 pounds), who plays water polo and baseball at Pali. His older brother Gabriel, who is at Chapman University, played quarterback for the Dolphins and also starred in school musicals.