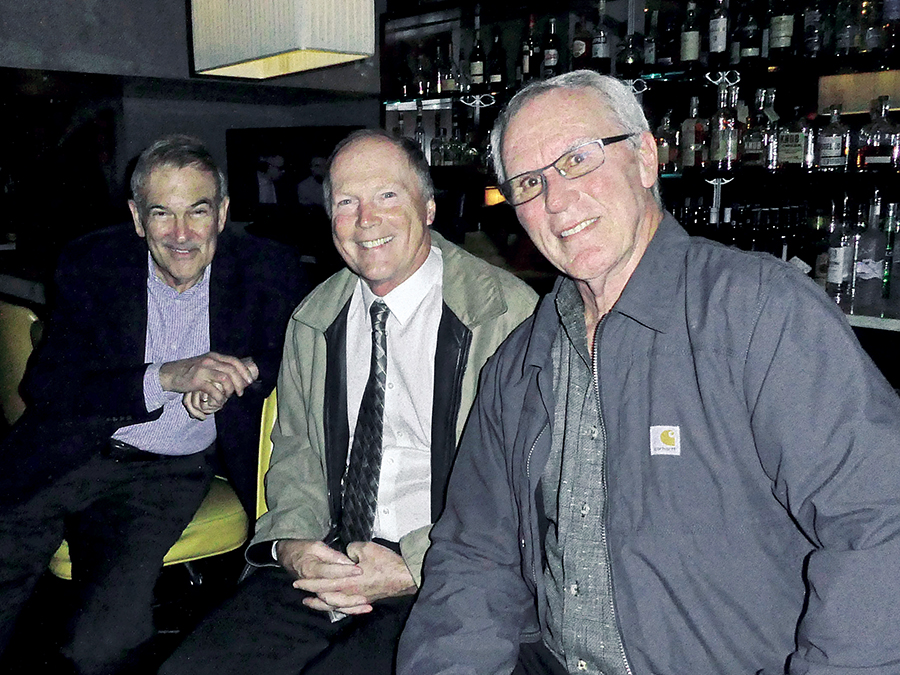 During our ongoing three-year tour of famous Los Angeles restaurants, our monthly lunch club has often encountered difficulty escaping Frank Sinatra and his Rat Pack’s shadow where we decide to dine.

It seems these guys had the same taste in restaurants as our roving foursome. This time it was Matteo’s on Westwood Boulevard, where we once again contended with their legacy. (Matteo’s is not to be confused with Madeo in West Hollywood, which will open its new eatery in Palisades Village this September.)

Owner and founder Matty “Matteo” Jordan opened his restaurant in 1963, with the help of his childhood friend Sinatra, a fellow native of Hoboken, New Jersey. That collaboration made Matteo’s an instant L.A. hot spot, which featured a great mix of fine Italian food, tuxedoed waiters and a friendly, upscale supper-club atmosphere.

The place became so popular that Jordan opened an adjoining restaurant in 1986, called A Little Hoboken, whose name was later shortened to Hoboken.

Our special guest in March was Dr. Richard Johnson, who happens to be the local physician who diagnosed both Arnie and me with heart ailments in recent years. We occasionally find ourselves still thanking him for convincing two slightlystubborn men about the urgency of visiting the Pacific Heart Institute in Santa Monica. We realized that he likely saved us from suffering more serious consequences.

Dr. Johnson was raised on a small farm in rural northwest Washington and worked his way through college in the farming and processing industry. After graduating from the University of Washington with a degree in physics, he attended medical school at Washington University in St. Louis. He re- turned to the West Coast to complete his residency in family practice at the UCLA Medical Center, where he held numerous clinical and academic posts. He was director of clinical services there for 19 years.

In 2001, “Dr. J” began his practice here in the Palisades branch of the UCLA Medical Group, which now operates as a private practice that he shares with three colleagues. He’s also a clinical professor at the David Geffen School of Medicine at UCLA. He and his wife Ann have lived in the Palisades for

38 years and raised their three children here. Arnie Wishnick and I studied the menu carefully after we arrived at Matteo’s, fully knowing that our personal physician might possibly be keeping score on just how healthy our dinner orders were. Lucky Barry Stein! He was the only member of our club who might escape the good doctor’s judgment. When Barry ordered the “fried” calamari as our appetizer, I knew we could ultimately pin that decision squarely on him, even though we planned on sharing his crispy dish. We were relieved when it arrived, and

Rich joined in the fun.

Barry ordered his off-the-menu favorite: linguine “vongole” with olive oil, garlic, anchovies and broccoli. Arnie chose the “Fuselle Primavera” with spring vegetables, olive oil, garlic and basil—and to impress his doctor, he ordered sautéed spinach on the side. Rich and I both chose the swordfish special that was served with a side of spinach.

To celebrate our favorite physician “Dr. J,” who had once played the role of “white knight” for a couple of us, we did this one up properly by ordering martinis, appetizers, salads, cappuccinos, and the obligatory tiramisù. Arnie really “let it rip” this particular evening by ordering a large Coca-Cola, and even had a refill.

Restaurant manager William Aragon turned out to be quite a chatty fellow who enjoyed telling stories about Matteo’s colorful history. He even fired up the electric train that circled overhead in the bar area. It seems that Matty and Sinatra were both toy-train enthusiasts back in their Hoboken days, so they added this sentimental feature to entertain their guests—and, of course, themselves.

Even though William seemed to have been quite intrigued with our group, given all the attention we received that night, we remain skeptical that our individual dinner orders will one day bear our names on the Matteo’s menu. However, you must admit that “Fuselle Primavera Arnie” does have a rather tasty ring to it.

Bob Vickrey is a longtime Palisadian and a regular columnist for the News. He also writes for the Houston Chronicle and theWaco Tribune-Herald.