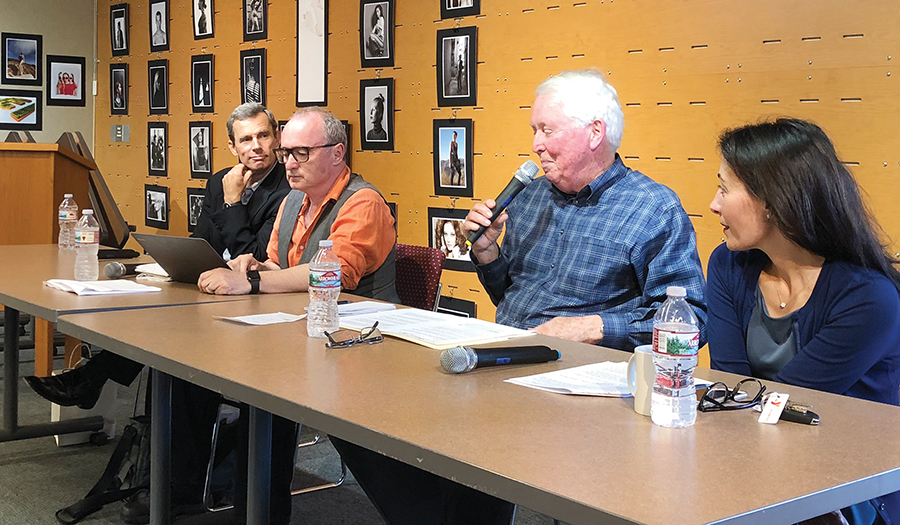 How to cope with the spread of ‘fake news’” was the key focal point at a forum hosted by the Palisades Democratic Club on May 8 in the Pacific Palisades Library community room.

More than 80 people squeezed into the room to listen to a panel discussion moderated by Pacific Palisades Community Council President Maryam Zar. The panelists included Terry McCarthy, a former foreign correspondent and now CEO of the Los Angeles World Affairs Council; Bill Bruns, former editor of the Palisadian-Post and now the editorial adviser of the Palisades News; and John Harlow, editor-in-chief of the Post and former London Sunday Times correspondent in Los Angeles.

The three men agreed that “fake news” existed, and then addressed the question why, when and how you spot it. They also clarified that over the past several years, “fake news” has become a popular term used by certain politicians to describe and dismiss news articles and television reports that they simply don’t like.

Bruns explained one of the underlying problems is the lack of fact-checkers on the Internet, where so many people now turn for news. “I think people trusted what we published in the Post [1993-2013],” he said. “We were rigorous in our reporting and we had a good copy-editing system that caught errors. Same as at the News.”

He recommended that citizens young and old should read at least one newspaper (print or digital), whether it’s the L.A. Times, the Wall Street Journal, the N.Y. Times or the Washington Post, because they have first- class reporters who are dedicated to pursuing the facts in a story. “I don’t trust stuff that comes over the internet,” he said.

Zar said it seems as though too many newspapers and magazines no longer have as many copy editors and fact checkers.“We’re not sure what we’re reading is accurate.”

Harlow said he felt that news reporting started changing 10-15 years ago, with the growth of the Internet and when in 2005, Steve Colbert coined the word “truthiness,” to define those who appeal to raw feelings at the expense of facts.

Colbert said, “Everybody on both sides is acting on the things that move them emotionally the most.”

McCarthy added, “Sustained fake news comes from Russia,” created by people who “sit in troll factories in Moscow or Saint Petersburg and jam people’s inboxes here in the U.S.”

He also recalled how he had become appreciative of the fact-checkers at major publications. When he reported a story for Time magazine about killings that happened in Indonesia, he wrote they happened in the summer. The fact-checker contacted him and noted that because half of the island was north of the equator and half south of the equator, this would make a difference in the season and she wanted to know the exact location.

McCarthy added an ominous tone when he said, “The Russians have long used propaganda—since the Cold War.” He also reminded his audience, “Putin got rid of all opposition newspapers, and he runs all the television stations.”

He lamented cable news, whether it be CNN, FOX or CNBC, because their evening shows have become so politically strident, people have begun to equate cynicism in all news. He said that in his quest to find facts,

“I’m watching less and less cable television.” Bruns agreed. He said he watches the commentators on all three networks, but it’s frustrating. “I wish the ‘talking heads’ on these shows would go out and do some reporting so we could watch fact-based discussions.” He added, “President Trump thrives in areas where there are no local newspapers, where people receive all of their news through FOX. That’s a major challenge in our country.”

McCarthy said the Russians started their internet propaganda with the Crimea and Ukraine, because they wanted to undermine those countries. And now, “It is used as a systematic campaign against us. They have been clever in undermining our system with the Internet and they are doing it systematically.”

Zar asked, “What is the best defense against fake news?”

Harlow replied, “It is not an easy answer because people believe what they want to believe.” The man who fired into the restaurant involved with “Pizzagate” was queried and he said he felt there was enough truth and saw himself as a potential hero. (Pizzagate revolved around the false claim that certain emails contained coded messages referring to human trafficking and connecting several U.S. restaurants and high-ranking officials of the Democratic Party with an alleged child-sex ring.)

Harlow said that the 40 most popular Facebook stories during the 2016 election were the most unbelievable and people tended to “click” on those stories most frequently.

“We all want to be entertained,” McCarthy said. “What is really insidious are the fake URLs.” He said that if you go to NBC.com.co, it is a fake site, made to look like NBC.com, which is real.

The panel agreed that corporations such as Facebook and Google need do more rigorous policing of their content. And people need to check the source of the information they are reading. For example, if you read a political endorsement attributed to the “Maine Examiner,” be aware that this so-called newspaper doesn’t exist.

Bruns pointed out that fewer correspondents are working for newspapers around the world and recommended websites such as humanrights.org and politifact.com to read international and political news.

By May 28, 2018
in Uncategorized
Related Posts
Comments
Leave a ReplyCancel reply