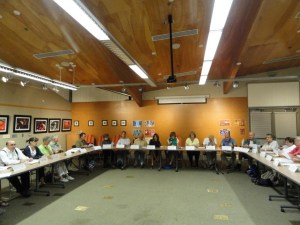 A lot of people go to movies for their entertainment, others prefer opera, dance or theater. Me, I just go to the Pacific Palisades Community Council meetings. They’re free, they take place twice a month (most months), and the commute to the Palisades Library is easy.

May 10 was a particularly fun meeting with lots of drama. Tempers flared about the nominations presented for the upcoming executive board election, including the positions of president, vice president, treasurer and secretary.

One might think the Palisades Council is a democratic institution. That would be vaguely right. Even though this esteemed body has the ear of our City Councilman and regularly sends recommendations “speaking for the community” to various city officials, the election process is so convoluted, it makes the electoral college seem simple.

You say you don’t remember voting for the PPCC president last year? You did not, and you also did not vote for the other three positions.

The Community Council (which is not a city-certified Neighborhood Council) is not required to follow the Brown Act, so none of its behind-the-scenes actions are ever made public. And since we in the Palisades are all so busy with our lives, there’s no reason we should have to be bothered with whatever this council discusses— even though the members speak for us.

How do you become president of the Community Council if residents can’t vote for you?

I’d lie if I said, “It’s simple,” but stay with me, all good movies have subplots.

First, to be president you have to be a member of the PPCC, which is divided into eight areas. Each area has a representative elected by residents within his or her area. You can run for the Council only in the area in which you live. There’s also an at-large representative voted upon by everyone in town (well, a few hundred residents who make the effort to vote).

So even though there are 23 people on this board, residents are allowed to vote on only two positions— for a candidate in their area and for an at-large candidate.

When it comes time to elect a president, the current president appoints a nominating committee. This committee then considers all the fine board members and decides which one should be president.

This year the committee nominated Lou Kamer, the current at-large representative, for president. They nominated Rick Mills, the Area 4 representative and a former Design Review Board president, for vice president. Chris Spitz, the current chair emeritus, got the nod for secretary, and Richard Cohen, who was PPCC president from 2008-10, for treasurer.

Earlier, Spitz had sent her specifications for the “slate” to the election committee, and it included George Wolfberg for president, Peter Culhane for vice president, herself for secretary and Cohen for treasurer.

When Spitz learned that the nominating committee had differed from her suggested slate, she announced at the May 10 meeting that her intention was to run as a team. “This is not little league,” she said. “We only want the most experienced team at bat.”

But fear not, someone jumped up and nominated Wolfberg, who is certainly experienced and even served as PPCC chair (2002-04). Another person nominated Culhane, the current Area 2 representative.

But, oh my, what to do, what to do, if the Spitz “slate” is not elected by the Council when it votes on June 14?

Sarah Conner, who represents the Pacific Palisades Residents Association and is a member of the nominating committee, said, “The Community Council has been run by the same team for many years. We added some new people with a different perspective.”

She also pointed out the committee nominated  individuals, not a slate.

Area 3 representative Danielle Samulon, who also served on the nominating committee, said: “Lou and Rick have not been on the Council as long as George, but it was a thoughtful process. We selected what we thought was best for the PPCC.”

Spitz responded, “I can’t tell you I will serve going forward. I am not prepared to undertake this with an inexperienced team.”

At this point in the “movie,” even though I needed to use the restroom, I didn’t want to leave for fear of missing more adults behaving badly. I mean, is this Council representing me, or are they in it for themselves?

Luckily, Barbara Kohn, a past Council president (2012-14) who served as chair emeritus under Spitz (president 2014-16), said: “George was a former chair, but Maryam [Zar, the current president] had never been a member of the PPCC before she became chair.” She also mentioned something about nominated candidates trying to hold the Council hostage.

Someone behind me whispered, “Cat fight.”

At this point I considered nominating myself, but alas, according to the bylaws, which were recently rewritten, any additional nominations could only be made by Council members. More nominations can be made at the May 24 meeting. Will they? Won’t they? The anticipation is killing me.

I urge all residents to come out and see democracy in action—well sort of democracy, but possibly lots of action— when the 23 Council members vote for their next president and the other members of the executive board.

Afterwards there will be vote counting by the moderator and one other non-voting board member. Wolfberg and Culhane suggest Richard Blumenberg, Susan Payne, Robin Meyers and Andrew Sacks for that role.

Isn’t the chair, Zar, responsible for organizing this? Gasp! Ohh, people of the Palisades this is one “movie,” I mean election, you don’t want to miss.

By May 30, 2018
in Uncategorized
Related Posts
Comments
Leave a ReplyCancel reply