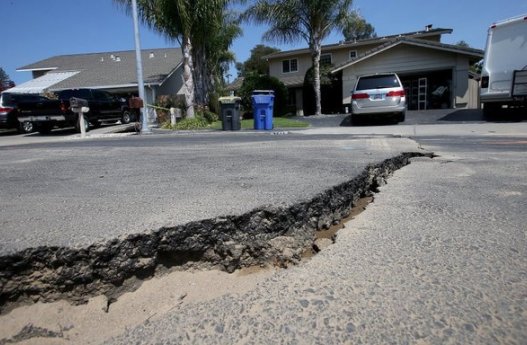 In November 2016, taxpayers approved Measure M, which promised $22.5 billion of that money would be used for street repairs. Additionally, that same year $19 million targeted for street repair was returned to the city’s general fund.

Tell that to the driver whose car had blown a tire on Radcliffe Avenue between Haverford and Bowdoin Street. “I’m going to sue the city,” he told the News. “That street has a giant hole in it.”

The middle of the street has a 12-inch by 12-inch hole (about three inches deep). Around it, the pavement is so uneven that it serves as an impromptu speed hump.

The street is well traveled because it’s a route for kids going to Palisades High School. Those who drive it stay to the far right and go exceptionally slow, so they don’t suffer a similar fate of losing a tire.

It will come as no surprise to residents that in a May 2013 L.A. Times story “Grading Los Angeles Streets”, this portion of Radcliffe received an F rating (last resurfaced August 19, 1992, and last inspected on November 9, 2011).

According to that report, 23 percent of Pacific Palisades streets (175 of 769) received a grade of F. (Overall the average for the streets here was a C-.)

According to the Bureau of Street Services, streets are rated using the Pavement Condition Index (PCI), a scale that rates the physical condition of the street by considering the pavement’s structural and surface operational condition, and is based on a 0 to 100 scale. An F means the street condition is very poor with the following characteristics:

A KCET November 16 episode, “Cycle of Disrepair: The Dangers of Biking in L.A.”, discussed the amount of money the city is paying to injured bike riders—and the families of deceased riders—because of accidents on unrepaired streets.

That episode also featured a snippet of the April 2017 L.A. city budget hearings in which Nazario Sauceda, director of the Department of Public Works of the Bureau of Street Services, was questioned by Councilman Mitchell Englander. (The entire budget meeting can be viewed at lacity.granicus.com/MediaPlayer.php?view_id=18&clip_id=16882, click on Bureau of Street Services on the agenda in the bottom left corner of the screen.)

“How much money are you giving back this year [to the general fund]? Englander asked.

“The bulk of that was pavement preservation?” Englander asked.

“Why do you have money left over? Why wasn’t it spent?” Englander asked. “We give the department money and we don’t expect a dime back because there’s so much more to be done.”

Sauceda told the councilman that was a question that he should ask the mayor. “As a team working together with the mayor’s office, we understand there is a need to balance the budget,” Sauceda said.

The city controller did an audit of the bureau, and in a July 31, 2014 report noted that $21 million was returned between 2010-13, which had been earmarked for street repairs.

After the KCET episode aired, the mayor announced Sauceda would be retiring.

The News emailed the mayor’s office November 27 (and cc’d Councilman Bonin’s office) with two questions: 1.) “Did the mayor ask Sauceda to help with the budget? 2.) Did the mayor realize how much money was coming back to the city and if so, why didn’t he direct Sauceda to use it towards pavement preservation?”

George Kivork, federal manager/associate counsel for Garcetti, replied the same day, “I am copying our press secretary Alex to help address your inquiry.”

Alex never replied, and the News sent a follow-up email to Kivork on November 29 that went unanswered. We urge readers to ask Bonin and Garcetti to ensure our D and F roads are getting repaired. It appears the money is there.