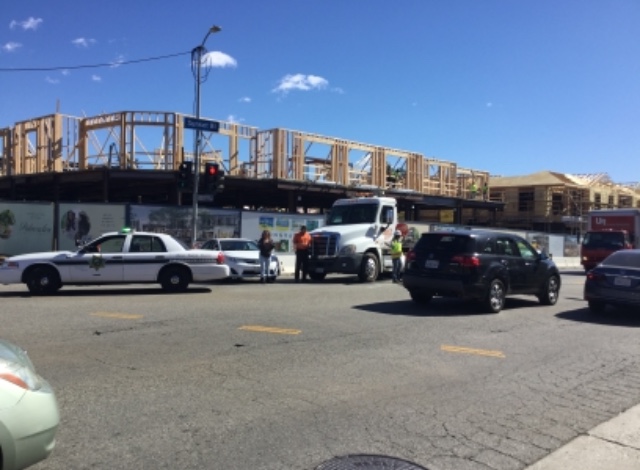 A male driver in a white car, traveling eastbound on Sunset, attempted to make a right-hand turn onto Swarthmore by Starbucks, around 10:30 a.m. Monday. The driver did not notice a man who has just entered the crosswalk and ran over his foot.

When the driver jumped out of his car to see if the man was okay, he forgot to put the car in park or shut it off and it rolled backwards onto Sunset and across the street. The driver’s door was open and smashed against a large truck in the far right-hand lane of Sunset that was parked for Caruso’s Palisades Village construction.

According to eyewitnesses, who were selling Girl Scout cookies on the corner, the man chased his rolling car back across Sunset. LAPD, Fire Station 69 paramedics, and Gates Security were all on site. The person with the foot injury refused transport from Station 69. The car was towed.

The LAPD officer on the scene said the driver did the right thing when he stopped to inquire about the pedestrian.