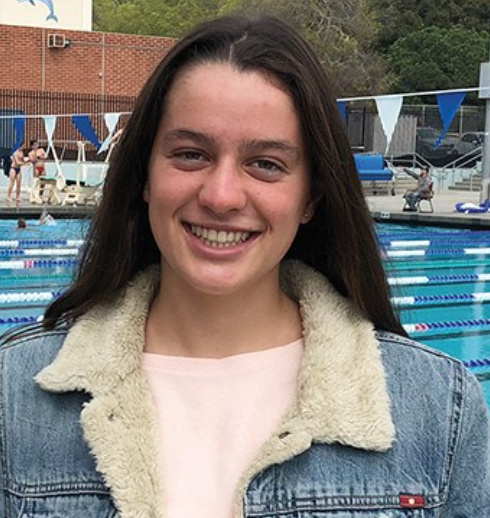 Dora Seggelke had tried soccer. She was also a gymnast and good: there was even mention of putting her on the national team.

But by the time she was in sixth grade at Paul Revere Middle School, she was done with sports.

Her mom had other ideas because she wanted her daughter to do some physical activity.

So Dora tried swimming. “Most of my friends were swimming,” she said and joined Team Santa Monica. “I wasn’t expecting to enter competitions.”

Her coach had other plans, and Dora was soon entered in a short course meet. She placed.

By the time she was in seventh grade, the coach was speaking to her about her potential, and her swim schedule increased to every day and sometimes doubles.

She has since switched to Westside Aquatics, where she continues to swim during the year. After winning the 200- and 500-freestyle at city finals last year, and doing well in competitive meets in the Southland, Dora was pursued by several colleges, but this fall she chose UC Santa Barbara.

“We’re really one big happy family. That’s one reason I wanted to be captain to help the freshmen be part of it.”

She feels the team’s goal this year is to win City and take even more people to state. She plans to at least swim in the state prelims, but unfortunately finals are the same day as the PaliHi prom and “It’s my high school prom, so I have to go.”

Dora, the daughter of Fay and Klaus, lives in Bel-Air and has an older sister, Elieka.