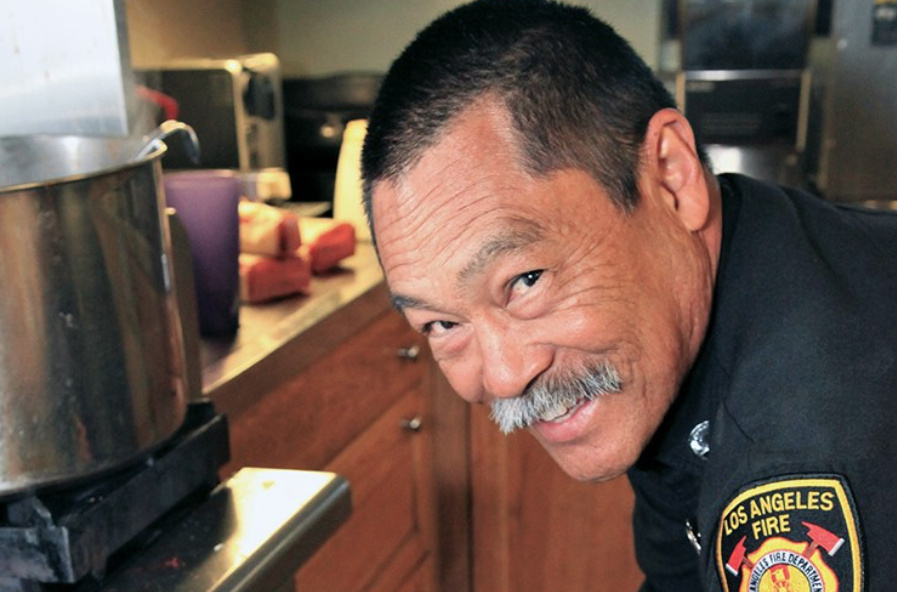 Chef Rob Scambia was preparing a banana and raspberry Neapolitan, a cheesecake and an apple and blueberry strudel at Fire Station 69 (Sunset and Carey) before dinner on April 5.

Scambia, who was chosen as Person of the Week on ABC’s World News Tonight with David Muir on March 17, 2017, had gone to a Palisades grocery store, purchased enough food for a feast and then spent the afternoon cooking for the C Platoon.

“I came here this morning,” said Scambia, who lives in Florida. “I’m honored to be here, they made me feel at home.”

Scambia said he has cooked meals for more than 417 fire stations in Florida, but this is the first station he has cooked at in California.

In a 2016 Orlando Sentinel article, Carolyn Scambia said her husband’s devotion to firefighters began when a fire broke out at their apartment complex after they moved to Florida from New York City in 2001 with their two-year-old boy.

“Firefighters bravely battled the flames and even managed to rescue a special toy for their autistic son,” the Sentinel wrote. “Two months later, the 9/11 terrorist attacks took the life of a firefighting friend. It was then that Scambia said he ‘promised God’ he would cook for all the fire stations in Florida.”

He felt that it was his way of giving back and honoring the 343 firefighters who were killed in New York.

Nearly 15 years ago, Scambia started assembling the recipes he had prepared at fire stations and put them into a “Hero’s Cookbook.” His plan was to donate the proceeds of the book to fire station benevolent associations.

He completed the first book in 2006 with 60 recipes, but lacked funding to get it published. Then, Florida firefighter Maria Bernard raised $5,000 through an online fundraiser.

Kleenex found the campaign online and reached out to Bernard with an idea to fea- ture Scambia’s story on their “Someone Needs One” marketing campaign. After Kleenex posted the story on its Facebook page, and sponsored the printing of 125 books, orders started flowing in.

Born in New York City, Scambia received his degree in pediatric dentistry in Perugia, Italy. He returned to the U.S., married Carolyn and they adopted their son before moving to Florida.

But Scambia wasn’t happy. “I was tired of putting my hands into people’s mouths,” he said. Supported by his wife, he went to culinary school until 1 p.m. and then worked overnight in telemarketing.

Now, when he’s not cooking for firefighters, the trained chef works part-time in the bakery department at a Publix’s grocery store.

He seemed right at home in Station 69’s kitchen. “It’s interesting to work in different kitchens,” he said. “It’s kind of fun and kind of a challenge.”

Maybe the person most surprised to have a bona fide chef in the kitchen was 69’s Captain Erik Schneider, who initially spoke to Scambia when he called and asked permission to cook for the firefighters.

“It took me a couple of minutes to figure out it was real,” said Schneider, who initially thought it might be a prank call. “I looked up the website and Rob was real.” The station’s other captains agreed that they should welcome Scambia to their kitchen.

Another surprised person on April 5 was firefighter Brando Blue, who isn’t stationed here, but was filling in. “I thought I was going to be working overtime, but now it’s going to be a treat,” Blue said.

The chef took several photos with the firefighters and hopes to publish them in his next cookbook. He has raised $58,000 through his cook book for Florida fire- fighters.

On ABC’s World News Tonight with David Muir, Scambia said, “What you can give and what you can give back is that joy from other people . . . That’s what I’m doing this for.”