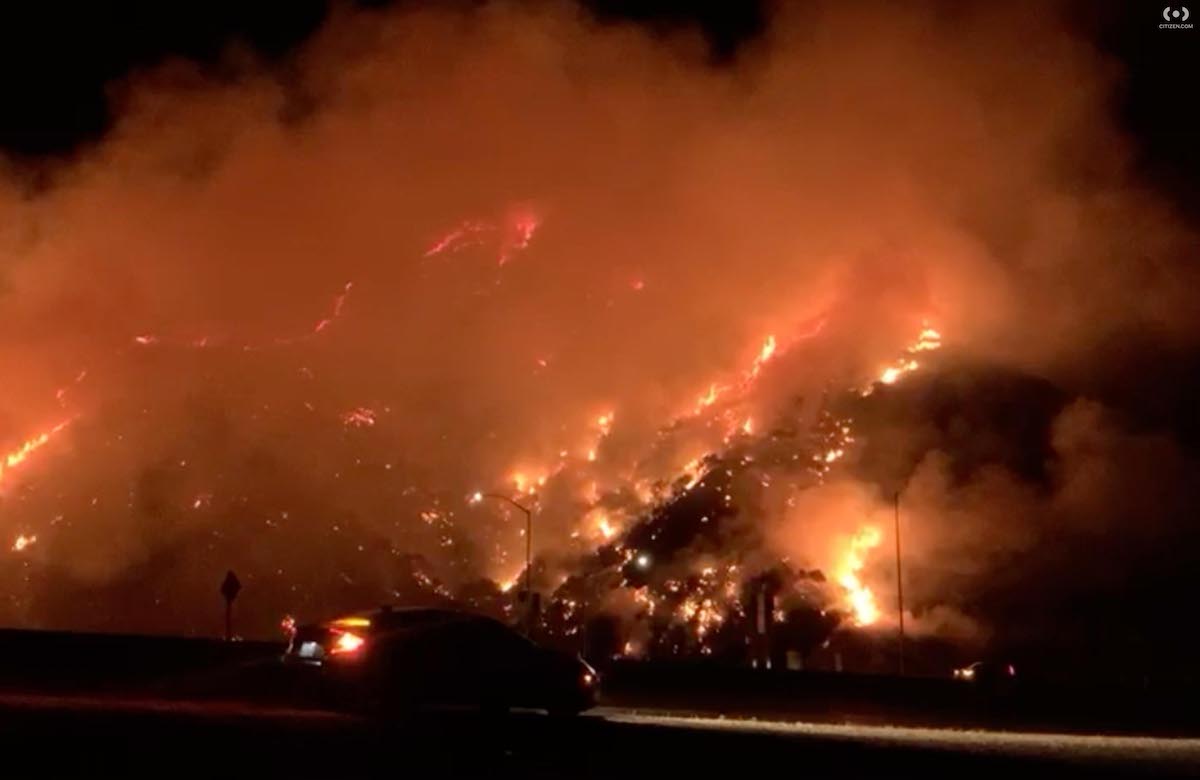 A brush fire that erupted off the 405 Freeway has burned through 50 acres of the Sepulveda Pass in Bel Air.

According to the Los Angeles Fire Department (LAFD), the fire–being dubbed the Sepulveda Fire–was first reported at 12:13 a.m. in the 1300 block of North Sepulveda Boulevard, east of the 405 Freeway near Getty Center Drive.

With 206 LAFD personnel now assigned, the fire is holding at estimate of 50 acres, and is considered 25 percent contained, as of 8:30 a.m.

“The fire..is what’s called a ‘Dirty Burn. This means there is a mix of burned, un-burned and partially burned vegetation within the fire area. There are three sides to the fire: Alpha (left), Delta (top of ridge) and Zulu (right). Firefighters have hand lines in place on the Alpha side all the way to the ridge. Zulu side still has about 200’ of line to lay to reach the ridge. The Type III Brush rigs are stationed along the top (Delta) and a water tender is supporting their operation, shuttling water to them (no fire hydrant available),” the LAFD said in an 8:30 a.m. update.

According to the LAFD, two LAFD firefighters suffered non-life-threatening injuries while battling the fire, and have been treated at the scene. Neither required ambulance transport to a hospital.

At 4 a.m., the LAFD said that there were no structures under threat from the fire.

Today, the crews will continue to work through the steep, difficult terrain to complete the fire line and increase containment, the LAFD says. Weather remains critical with 96 degree temperatures, 9 percent humidity and winds at 9mph.

“For the morning commute, CHP assures us the San Diego (I-405) Freeway will remain open in both directions, but the northbound freeway off ramp at Getty Center Drive will remain closed until LAFD operations are complete. Sepulveda Boulevard is expected to be closed in both directions in the area of the fire, and motorists are encouraged to allow extra time in the travel and monitor traffic reports on news radio,” the LAFD said.

The fire is burning in an area that has experienced several other blazes recently. Last October, The Getty Fire broke out along the 405 Freeway in the Sepulveda Pass near the Getty Center, leading to thousands of evacuations, burning over 740 acres, leveling 10 residences and damaging 15 others.

In 2017, the Skirball Fire burned where Sepulveda Boulevard crosses the 405 Freeway, burning over 420 acres, destroying six structures and damaging 12 others.