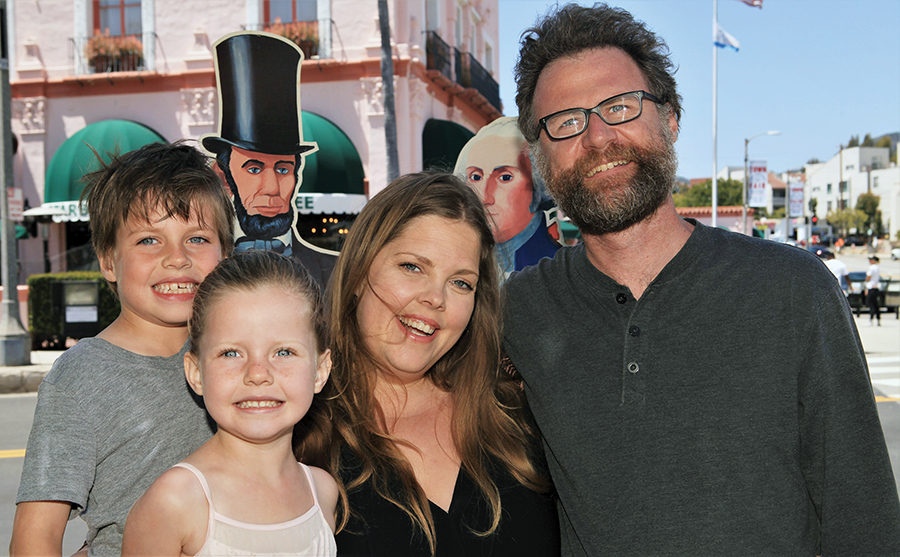 “Palisades Parade — 70 Years of Cheer!” will be the theme of this year’s Fourth of July parade.

Brendan Serapiglia beat 70 other entries to win the opportunity to ride in the parade on a Station 69 fire truck with a group of family and friends.

He and his wife, Lauren Horner, who have lived in the Palisades Highlands since 2009, have entered the contest before.

“We’re always excited when the theme contest is announced,” said Serapiglia, who noted that in law school, he was taught that you always have to find a fact and he and his wife wanted to highlight that this was the 70th anniversary of the parade. “We wanted to come up with something catchy and wanted to reflect on patriotism and the celebration.”

Born in Canada, Serapiglia attended boarding school in London, where he lived from the age of 13 to 27. He received his doctorate degree in physics from Imperial College, University of London.

He moved to UC Santa Barbara in 2001 to work as a research scientist in physics. His project was to find a more efficient and sensitive astronomical technique for measuring aspects related to the origins of the universe for NASA.

In the process, Serapiglia met his wife in 2002 and they married in 2004. Having grown up in Westchester, she convinced him to move to L.A. Her grandparents, David and Helen Horner, lived in Pacific Palisades.

The couple both attended Loyola Law School. Serapiglia got his law degree in 2008 and is a patent attorney with Gates & Cooper, LLP, while his wife is a criminal defense attorney.

“I’d fallen in love with Southern California,” he said. “As soon as we had enough money, we moved to Pacific Palisades.”

The Serapiglias have watched the parade every year since they moved here and generally set up early at their favorite location: Sunset and Via de la Paz, near the DWP power station. Once their children were born (a son, 6, and a daughter, 4), they continued the tradition, bringing the kids along to the parade.

“We love the community; we love the parade,” Serapiglia said. “My son has walked in the parade with Gerry Blanck’s [Martial Arts] group.”

A history buff, Serapiglia said one of the aspects that he likes about Pacific Palisades is, “There are ties to the past and there is respect for tradition, but it sets you going forward.” The parade, he feels, serves as a link between the past and the future.

“There are a lot of older people living here and you can draw from their experiences—and there are lots of new families with young children moving in.”

He loves this hometown parade because “There’s skydiving, there’s bands, there’s lots of fancy stuff going on there.”

Serapiglia has attended the Rose Bowl parade, but said, “I prefer the Palisades pa- rade. You don’t have to travel and you get a lot of ‘bang for your buck’ here.”

He and his wife have told their kids about winning the theme contest and their chance to ride on the fire truck. “The kids were very excited,” Serapiglia said.

“We really love the community. Everyone in the Palisades is so lovely. I’m happy we live here.”