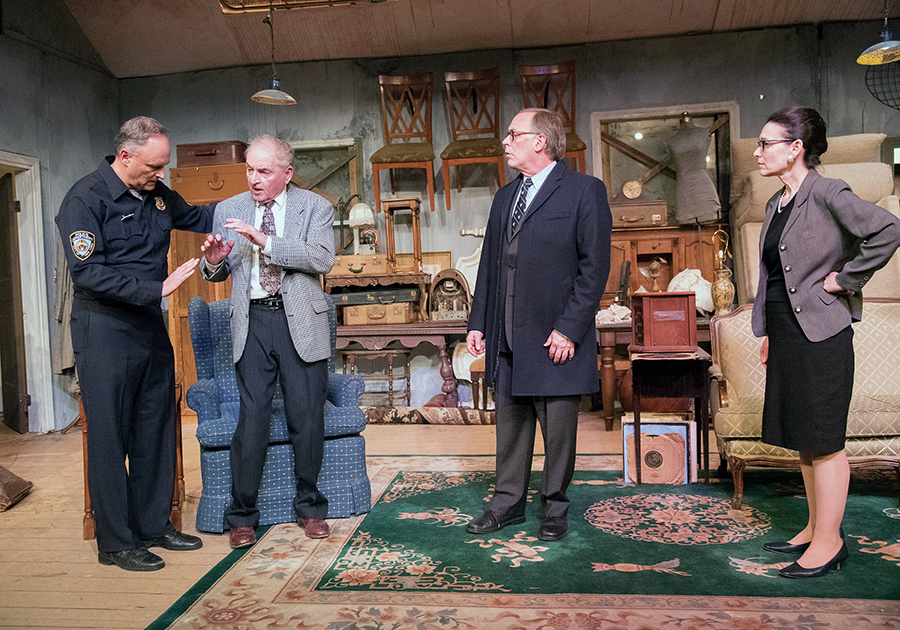 The sale of a family’s long unused belongings provides an unexpected chance for two bitterly divided brothers to air their differences in “The Price” by Arthur Miller.

The family drama, which opened at Theatre Palisades on January 12, focuses on the paths that the two brothers have taken. Walter (Phil Bartolf) has let nothing get in the way of material success, continuing his education even after his family seemed to lose everything in the Great Depression, while Victor (Matthew Rhodes) dropped out of school to care for their father and still refuses to step out of his rut even though their father is long dead.

These choices have hurt both brothers in different ways. One has felt ashamed and guilty, while the other feels mistreated and resentful. Both have festered in silence, because until this day in 1968, the two brothers hadn’t spoken in years.

But the sale’s negotiation brings out long-buried feelings and provides an opportunity for change. However, Victor, a 28-year police force veteran, would have to accept his brother’s overtures, and he is reluctant to recast his brother as a friend rather than a villain. As his wife, Esther (Terri Parks), tells him, “You can’t bear the thought that he’s decent.”

Approaching 50 years old, Victor says he’s too old to consider school or a new career, which Esther keeps urging him to do. She notes, “You’re free, and you can’t make a move.”

Sitting in the middle of the brother’s quarrel is not only Esther, but Gregory Solomon (Jack Winnick), a crafty and humor- ous octogenarian with his own painful past who wants Victor to accept a lowball price for the furnishings and other belongings.

The sale price is Victor’s choice as both Esther and Walter make clear, but they both urge Victor not to devalue the goods or himself. He doesn’t have to accept the low bid. He could get other appraisals or even multiply his proceeds by ten times by accepting a suggestion from his brother.

However, doing so would mean letting go of the stories he has told himself all these years that are revealed as the brothers argue. As Victor tells Walter, “You can’t just walk in here with a splash and wash away 28 years.”

The drama, directed by Tony Torrisi, exposes the anguish of the family slowly, with Victor, beaten down by both life and his own choices, taking the center stage. The story of staying locked in a path of lost dreams has some autobiographical roots for Miller, who, like Walter, went to college where he thrived while his older brother left college in his sophomore year to help their father’s ailing business. A brilliant childhood friend also joined the police force after his father was ruined in the Depression and was an inspiration for the character of Victor. In the TP production, the story proceeds in real time as the family’s messy life is paralleled by the packed attic (designed by Sherman Wayne), which like their lives needs to be cleaned out.

The brothers’ painful struggle is clearly painted by Rhodes and Bartolf, while Park’s Esther is caught in the middle. Winnick’s lively portrayal spices things up with not only humor but occasionally pathos.