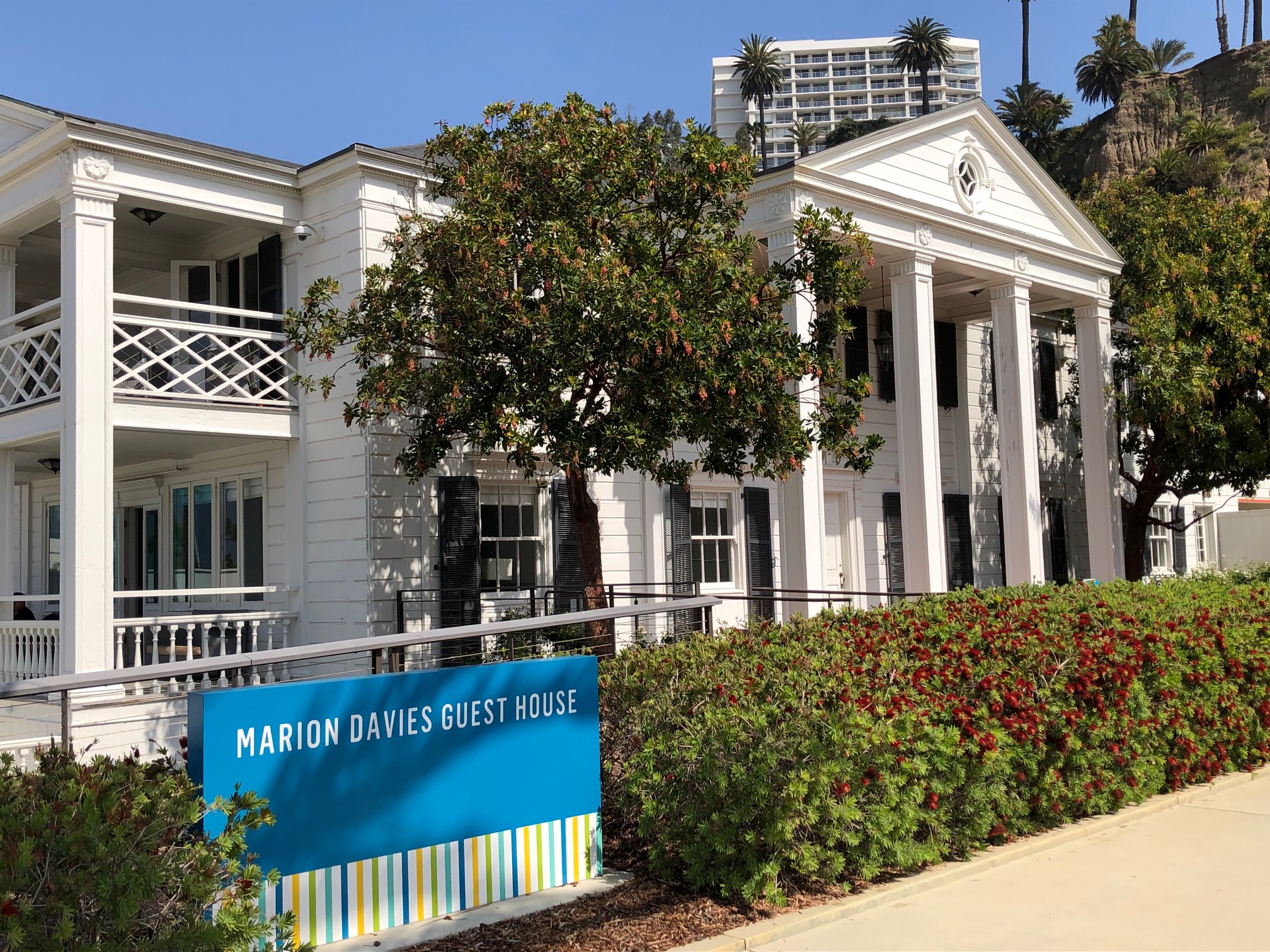 What would you say if I told you that 5 acres of beachfront property; an ornate marble swimming pool; a beautifully designed facility built on the footprint of a 110-room mansion; a refurbished 1920s guesthouse; a playground, splash-pad and volleyball courts ALL with full on ocean views could be yours for the day…FOR FREE!?

Well, it’s true.  As the original owner, famous newspaper owner William Randolph Hearst said: “Truth is not only stranger than fiction, it is more interesting.”  You can just head on over to 415 Pacific Coast Highway any day of the week between 8:30 and 6:30 to enjoy this membership free beach club.

As cool as The Annenberg Beach Community House is with its stunning location, fabulous facilities and tons of events and classes…its history is even cooler.

The original Beach House was built in 1929 by William Randolph Hearst for his true love, actress Marion Davies.  The compound was THE place to see and be seen on Santa Monica’s Gold Coast.   Dubbed the ‘Versailles of Hollywood’ the massive mansion designed by Julia Morgan cost $3 million to build and $4 million to furnish! The current Beach House was built on the same footprint as the original mansion.  The lovely Marion Davies Guest House still stands and you can tour it for free or just be a guest, sit for a bit and enjoy the free Wi-Fi and the views.

Hearst and Davies were THE power couple of their time entertaining Hollywood and political royalty with massive, legendary parties.  Somebody had to enjoy the 37 fireplaces, tennis courts and gardens and test out the 55 bathrooms, right?  One memorable circus-themed party hosted 2,000 costumed guests who, among other things, could enjoy the full-size merry-go-round that Davies borrowed from a Warner Bros. set.

Here we are in 2019 and although there is no merry-go-round you can still party down in the very same seaside spot.  April 28, The Annenberg is celebrating its tenth anniversary with a HAVE A BEACH BALL Anniversary Celebration.  Can’t make this fantastic special event?  No worries.  There are PLENTY more things to enjoy all year round such as Beach Volleyball, Yoga Classes, swimming (for a fee), playing in the playground, or maybe just bring a picnic and eat under an umbrella at one of the many tables and chairs placed around the grounds.  You can also dine on the sand at the Back on the Beach Cafe. If you have a special event you can reserve and rent a canopy on the sand for up to 30 people.   Are you planning a wedding or a biz event or maybe you just want to revive the zeitgeist of the Gold Coast-see-and-be-seen parties and hold your own catered event?   You’ve got it!   Visit the website www.annenbergbeachhouse.com to make a reservation and land an ocean view space in the main building or the lovely historic guesthouse (fees vary).

Be on the lookout for other cool events and exhibitions including artist in residence shows; Beach Dances (public dance rehearsal and workshops with killer ocean views from a platform in the sand); Public Library pop ups; cardboard regattas at the pool; community picnics; concerts and more.

Walter Annenberg, founder of the Annenberg Foundation whose $27 million dollar grant made this wonderful public Beach House a reality said,  “Accomplish something every day of your life.”   I think he, Davies and Hearst might agree that fun counts and fun is definitely easy to accomplish at the Beach House.

The Annenberg Community Beach House’s 10th anniversary, featuring Santa Monica Mayor Gleam Davis, will kick off with at 10:30 a.m. with the DC6 Singers, a Capella group and include opening remarks, culminating in photo opportunity where speakers will launch a dozen colorful beach balls into the air. Following opening remarks, participants will organize on the sand to participate in an aerial photo of guests making a shape of a beach ball. For more information, click here