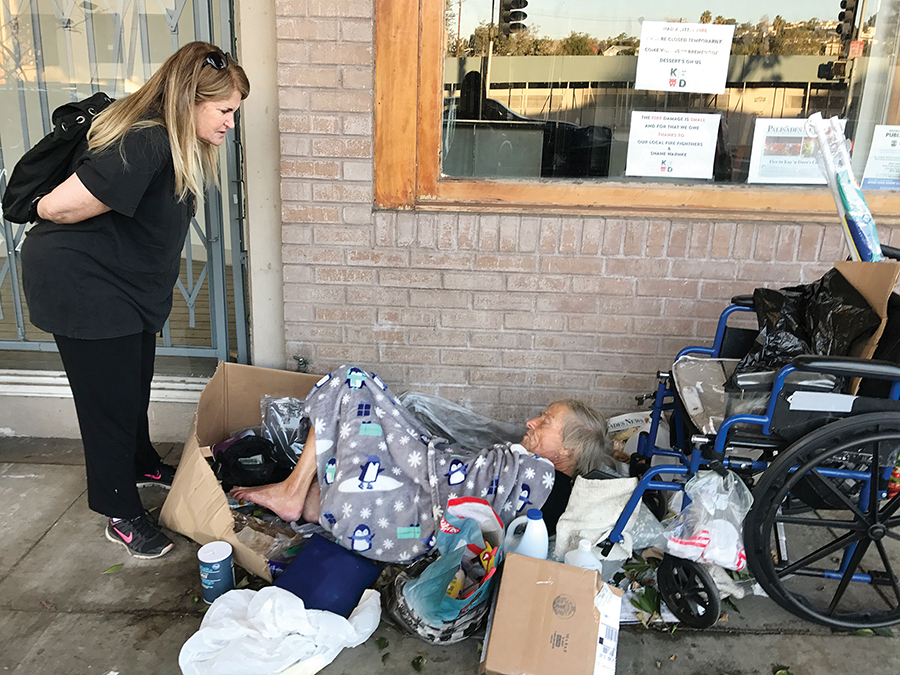 It seems that everyone knows Timmy, a Pacific Palisades homeless man in a wheelchair, who often screamed obscenities, sometimes used the public sidewalk as a bathroom and, when lucid, spoke of his heart condition and his hatred of some minorities.

Although the Pacific Palisades Task Force on Homelessness (PPTFH) repeatedly offered him help to get off the street, he refused. (He is now living on his enabler’s driveway in the Huntington Palisades.)

Or how about “Pretty Blonde,” who lived on the bluffs of Pacific Palisades? She muttered incoherently, her head was filled with lice, and even though her family wanted to help, they were almost stymied when a law enforcement official said she did not meet the criteria of gravely disabled.

The Daily News reported on January 31, “The 80-pound homeless woman who lives on Skid Row has cancer. She has been stabbed three times.”

The story pointed out that even though she’s been diagnosed with a mental illness and doesn’t know she’s suffering, she has the right to refuse medical help.

The current law prevents anyone, even a doctor, from helping these people. They have the right to be homeless and they have a right to refuse medical help even if they don’t understand fully their own medical or mental health condition.

The PPTFH addressed this question “Severely Mentally Ill Homeless: What to Do?” on January 29. In the past two years, the local Task Force has successfully placed 75 percent of the homeless people in some sort of housing.

The remaining 25 percent of the Palisades chronically homeless have proved difficult to provide with housing.

Dr. Emily DeFraites of the Veterans Health Administration and Brittney Weissman, executive director of the National Alliance on Mental Illness L.A. County Council, addressed about 40 people gathered in the Palisades Library community room about mental illness among the homeless.

“We are working to change the policy,” Weissman said, “to help families where there is mental illness.” She explained that her organization helps a wide range of people from those who have a family member who is just starting to exhibit symptoms of mental illness to those who are dealing with someone with full-blown symptoms.

DeFraites, who received her training at Bellevue, then worked with homeless street teams (including those on Skid Row), moved to the VA two years ago. “I’m a recovering-oriented therapist,” she said. “I want to figure out how to get them well, so they can live their best life.”

Weissman added, “We need to treat before tragedy. Right now it’s backwards. Tragedy has to strike before we treat.”

In order to be committed for mental health treatment, the person has to be deemed 1.) danger to self; 2.) danger to others; and 3.) gravely disabled.

The women noted that the first two categories rarely bring someone in for help, because “people who are serious about committing suicide won’t talk about it; and the same is true about those who plan to hurt someone else.”

The third category, gravely disabled, can be subjective.

Defined as “a condition in which a person, as a result of a mental-health disorder, is unable to provide for his or her basic personal needs for food, clothing, shelter, or medical treatment where the lack of failure of such treatment may result in substantial physical harm or death.”

The problem? A cardboard box could be viewed as shelter, going through garbage could be described as seeking food, and even if someone has an ulcerated lesion, is covered in lice and sitting in feces, they might not be considered gravely disabled. The women join a long list of health care providers who are pushing for two additional words “medical treatment” to be added the definition of gravely disabled,“ as a result of a mental health disorder, is unable to provide for his or her medical treatment . . .” They say by adding medical treatment to the description, it would allow doctors, social workers and family the right to give a mentally ill person medical care.

“On Skid Row, I’m amazed at the number of women who have a primary psychosis. One of the women I saw had graduated from Brown,” DeFraites said, noting that if that person could be put on the right medicine, in about five weeks she could be functioning and reconnecting with society. She explained that those on substance-induced psychosis needed to receive different treatment and that it was important for a psychiatrist to be among those on the streets evaluating the homeless. (PPTFH has a psychiatrist who sometimes accompanies its social workers.)

Weissman added that sometimes a mentally ill homeless person commits a crime, for example taking food from a store. “It could be really traumatic for them to be taken away in handcuffs,” she said. “If someone has a broken leg, we don’t call the police. We need to rethink how we deal with treatment. We need to put money back into mental health.”

Serious mental illness cost American $193.2 billion in lost earnings per year, and about 20 percent of state prisoners and 21 percent of local jail prisoners have a recent history of a mental health condition.

According to the Mental Illness Policy Organization, of the 246,317 prisoners in jail in California 39,411 are seriously mentally ill.

“When O’Brien and Johns began tracking hospital bills of chronic inebriates including substance-abuse-treatment costs, doctors’ fees and other expenses, they realized Murray ran up a bill as large as anyone in the state. O’Brien concluded, ‘It costs us one million dollars to not do something about Murray.’”

Local health officials, including Weissman and DeFraites, argue that we need to offer the mentally ill homeless medical help.

They spoke at a L.A. County Board of Supervisors hearing the next day on the subject. The board voted 4 to 1 on January 30 to sponsor legislation that would allow law enforcement and medical teams to determine if an individual is gravely disabled.

L.A. County Supervisor Kathryn Barger said, “Allowing the most vulnerable to languish and even die on the streets without a lifeline to medical care is inhumane.”

L.A. County Supervisor Sheila Kuehl was the sole dissenting voice because she said she worried about self-autonomy and civil rights.

During the hearing, Kuehl cited forced sterilization in prisons, as well as LGBTQ youth who had been placed in mental institutions (civil rights violations) and her reason for not voting with the board.

At the January 29 Palisades meeting, Weissman said, “It’s complicated—it’s against wanting to make sure that people are not dying with their ‘rights on.’”