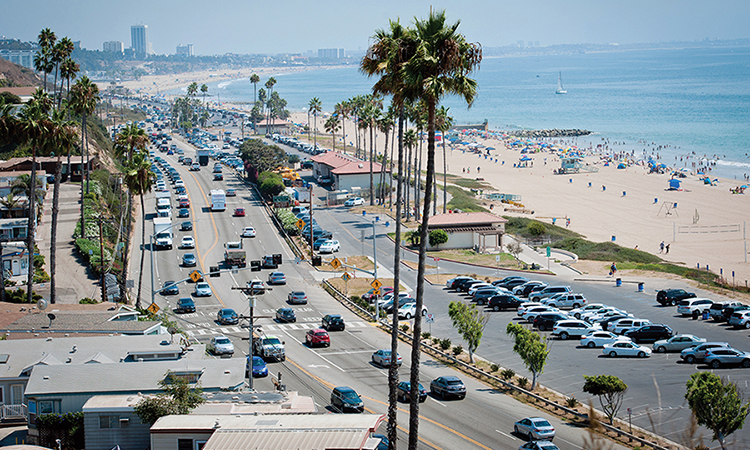 The Los Angeles County Sheriff, which serves Malibu, reported five fatalities year to date, as opposed to two in 2016.

On March 4, a motorcyclist was struck by a car and killed as he attempted to make a U-turn at Leo Carrillo beach. Two days later, a solo driver hit a sign and died.

Later in March, Germaine Lathouwers, 55, was struck by a vehicle as she tried to cross PCH near Zuma Beach.

In May, Kokab Sheikholialaavasani, 83, was struck and killed as she attempted to cross PCH in the early morning hours.

The fifth fatality occurred on November 29, when a car that was being pursued by Los Angeles County sheriffs slammed into parked cars, caught fire and killed gardener Antonio Castillo, 28, who was taking out the trash.

L.A. County officials said that arrests for DUI were down in 2017 and they attribute that to Uber and other ride-sharing companies.

The L.A. Police Department, which covers PCH from Entrada to Coastline Drive, reported that in the third quarter (ending September 30), there were six traffic collisions, three of which were attributed to unsafe turns, but no fatalities.

The Santa Monica Police Department reported that from September through December 20 there were 15 collisions on PCH between Entrada and the McClure Tunnel. Five resulted in injuries, with two fatalities.

A pedestrian was killed crossing PCH near the California Incline around 5:20 a.m. on November 21. Two vehicles traveling northbound hit the man, with both drivers remaining on scene.

The roadway closed for hours. At the task force meeting, the Santa Monica official was asked if this was a transient. “He hadn’t been home for seven months,” the official said, noting that it appeared there were mental issues. Santa Monica police had received reports about a man on PCH, but were not able to respond in time to prevent the accident.

In October around 7 p.m., Kazumasa Nozaki, 23, was riding PCH on his bicycle while pulling a small trailer. A transient from Hawaii, he was wearing all black and the there were no lights or reflectors on the bike or trailer when a car struck him from behind. The driver originally fled the scene but was chased down by bystanders.

PCH was closed for several hours during the investigation. Many Palisades residents may also remember the August 23 death of a pedestrian at 5:10 a.m. in the 1100 block of PCH, which snarled traffic for hours. The pedestrian was on the highway (near the Incline) for unknown reasons, and was struck by a northbound vehicle. The driver stayed on scene and cooperated with officials.

At the end of the meeting, representatives of State Senators Henry Stern and Ben Allen and Assemblymember Richard Bloom announced that a $150,000 safety corridor grant had been secured from the California Office of Traffic Safety to address traffic, pedestrian and bike problems along PCH. Pat Hines, founder and director of Safe Moves, was introduced and will work with implementing the grant. Her nonprofit was named Safety Program of the Year by the United States Department of Transportation and Hines was featured on “The Today Show,” “Good Morning, America,” “20/20,” “Oprah”and “Dateline.”  For more information, visit safemoves.org.

The PCH Task Force was created more than a decade ago in an attempt to bring the different roadway jurisdictions together on a regular basis. The highway runs through Santa Monica, Los Angeles, Malibu and unincorporated areas that are governed by the state/Caltrans.